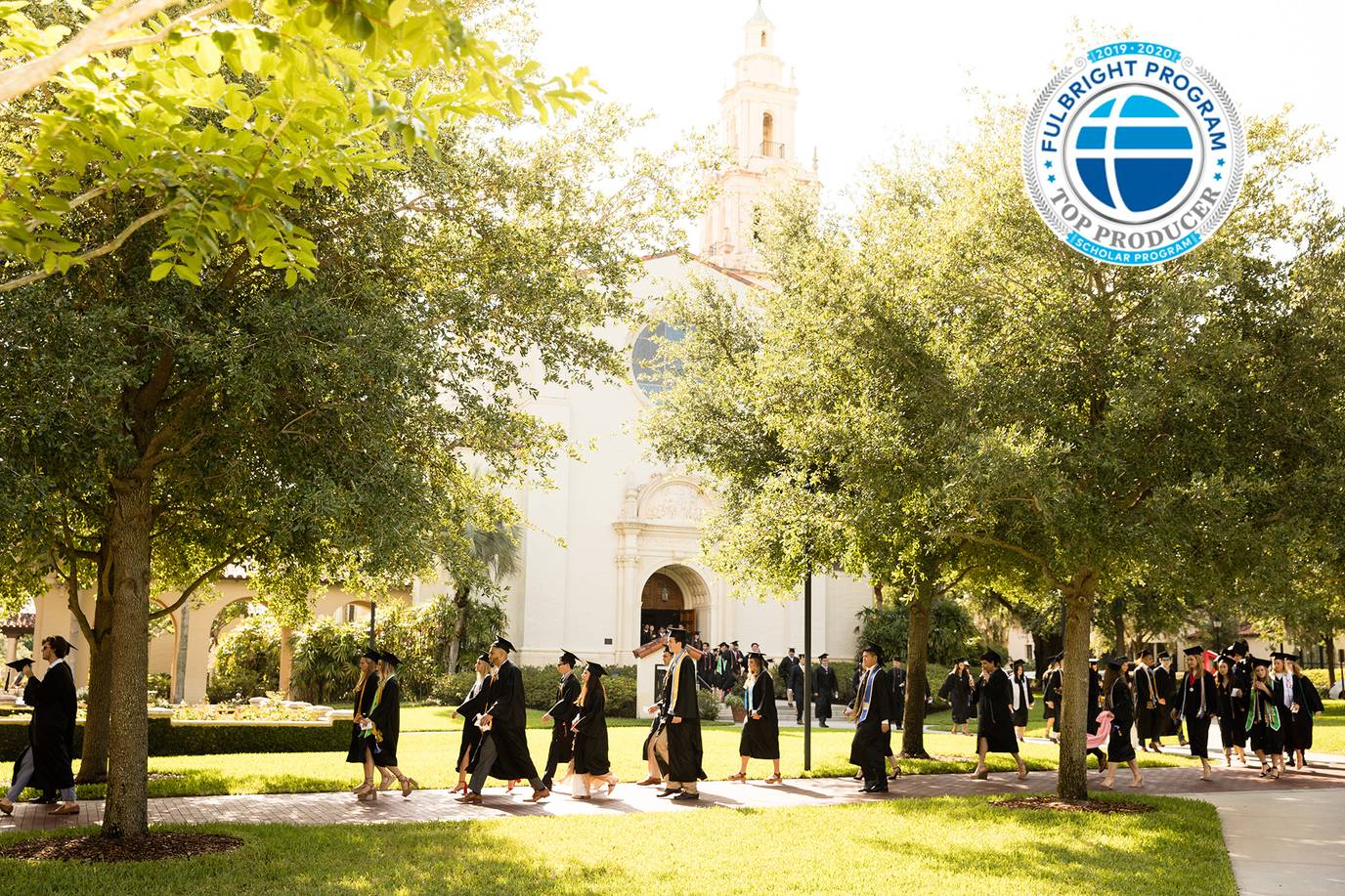 For the eighth time, Rollins is one of the leading producers of U.S. Fulbright Students among master’s institutions.

The U.S. Department of State’s Bureau of Educational and Cultural Affairs recently announced the U.S. colleges and universities that produced the most 2019-20 Fulbright Students, and for the eighth time since 2009, Rollins made the list. This honor is an important marker in a continuing legacy of cultivating lifelong leadership and international service among graduates of the College.

The Fulbright Program is the U.S. government’s flagship international educational exchange program. Top-producing institutions are highlighted annually in The Chronicle of Higher Education.

Among the seven Rollins Fulbright recipients for 2019-20, five traveled abroad to teach English: Nico Khazzam ’18 to Brazil, Kate Knight ’19 to Jordan, and Jonathan Leeper ’19 to Spain. Ryan Colangelo ’19 and Adam Roderick ’19—the first U.S. military veteran from Rollins to receive the distinguished honor—are both teaching in Germany. Caleb Archuelta ’18 earned a postgraduate award at the University of Bristol, where he’s studying international security, and Karina Barbesino ’19, also a winner of the Boren Scholarship and the Critical Language Scholarship, declined a Fulbright to teach in Taiwan for other opportunities.

“That Rollins is again recognized as one of the nation’s top producers of Fulbright scholars demonstrates our commitment to one of the pillars of our mission—to educate students for global citizenship,” says Rollins President Grant Cornwell. “This is a promise we make to our students, and this recognition is evidence of a promise kept.”

Since receiving its first Fulbright Award in 1951, Rollins has produced a total of 77 Fulbright Students—52 of whom have been named since 2006.

Jayashree Shivamoggi, director of Rollins’ Office of External & Competitive Scholarship Advisement, says that receiving a Fulbright grant can not only jump-start a student’s career, but also broaden and deepen their understanding of the world for a lifetime. Shivamoggi has been guiding Rollins students through the rigorous application process for more than 15 years, meeting individually with prospective applicants to help them determine the right program and destination, which can involve months or even years of soul searching around goals, intentions, and future plans.

“They join this elite list of students who have gone abroad and served as soft ambassadors for the country,” says Shivamoggi. “When they come back, they find themselves much more attractive candidates for graduate school, or when they're applying to jobs. They find themselves much more culturally competent as representatives of the United States.”

Fulbright, the U.S. government’s chief international exchange program, was created by Congress in the aftermath of World War II to foster international goodwill and cross-cultural understanding. Since its inception in 1946, more than 380,000 Fulbright Scholars (aka Fulbrighters) from around the world have been chosen for their academic merit and leadership capacity to promote peaceful relations among nations—an endeavor that reflects the hallmarks of a Rollins education. This includes dozens of Nobel Prize laureates and Pulitzer Prize winners as well as several heads of state and members of Congress.

Annually, more than 1,900 U.S. students and young professionals in more than 100 different fields of study are offered the highly competitive, merit-based Fulbright grants. Teaching is a popular pursuit, but there are also Fulbright artists, researchers, social entrepreneurs, and others. The Fulbright U.S. Student Program operates in more than 160 countries—from Albania to Zimbabwe.

“It’s immensely satisfying to partner with students who pursue Fulbright opportunities, which often begins in the first year of enrollment at Rollins,” says Shivamoggi. “It’s pleasing to see so much diversity in terms of interests and personal backgrounds reflected among the Fulbright scholars from Rollins.”

And that’s just what the State Department is looking for in applicants, noting there isn’t such a thing as a typical Fulbrighter. Instead each scholar must represent the richness and diversity of their home country while demonstrating a strong academic background, leadership potential, initiative in an area of interest, and a passion to foster cross-cultural understanding.

The Fulbright Program is funded through an annual appropriation made by the United States Congress to the Department of State. Participating governments and host institutions, corporations, and foundations in foreign countries and in the U.S. also provide direct and indirect support. Lists of Fulbright recipients can be found at fulbrightonline.org/us. To learn more about the Fulbright Program, visit eca.state.gov/fulbright.