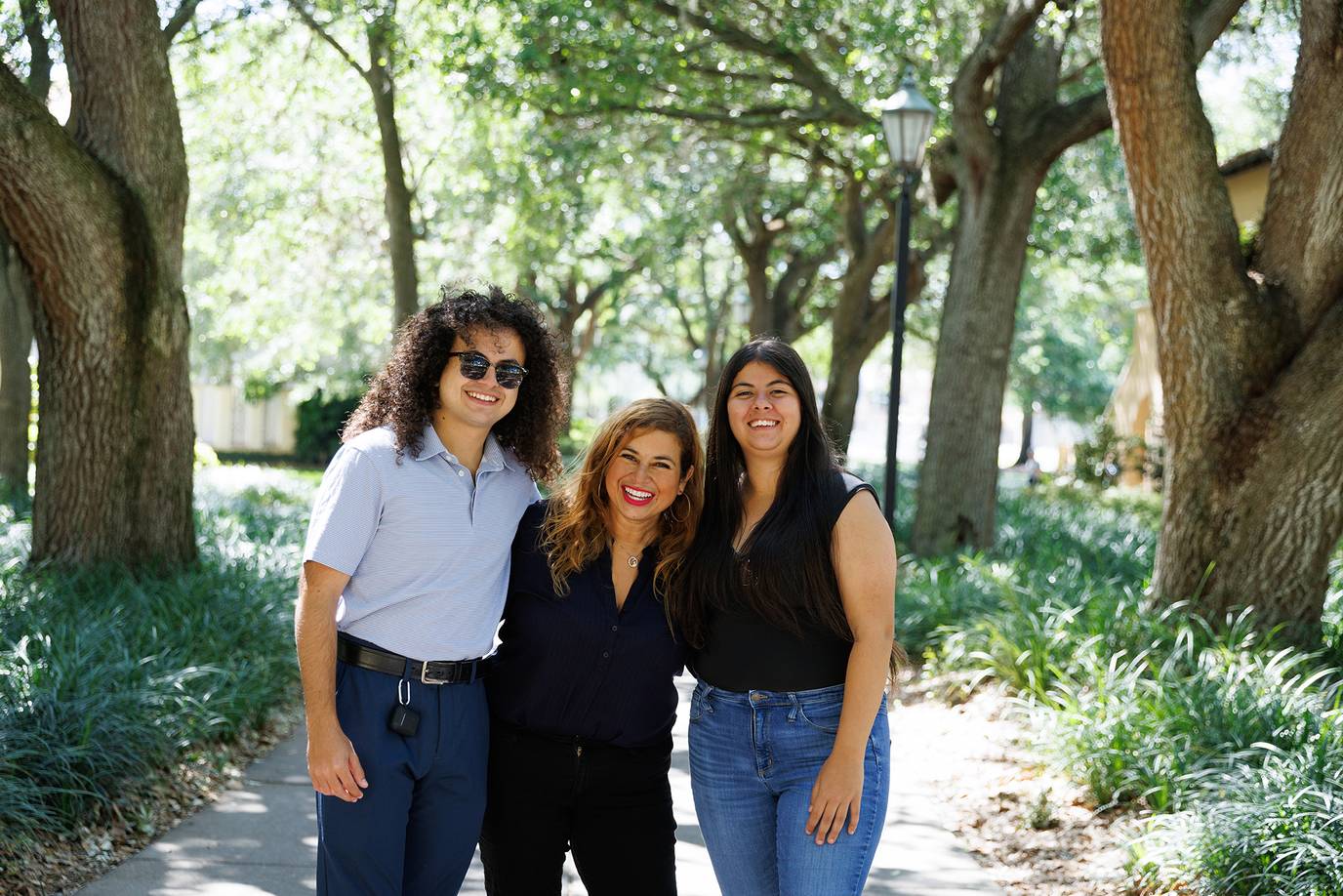 Three students, two generations, one legacy—a trio of Tars discover their pathways to purpose at Rollins.

As a first-generation American living in a motel with her kids, Marybelle Doe ’22 dreamed that her daughter, Topanga Sena ’22, would one day be the first person in their family to earn a college degree. But she never imagined they would both graduate the same weekend from the No. 1 regional university in the South.

“Being from a family that emigrated from the Dominican Republic, we were really humble,” says Doe. “Everything was stacked against our family, and I just kept pushing education for my kids.”

And so it was never a question of if Topanga would go to college, but where. Among many tempting offers, Rollins won her heart.

“I already loved the campus,” remembers Topanga, a business management major. “But I also wanted somewhere I wouldn’t get lost in the crowd. When I saw Rollins had small class sizes, that solidified my decision.”

A couple of years after Topanga started at Rollins, Doe, a longtime teacher’s aide, discovered the Pathways to Teaching program, a unique partnership between Rollins and Orange County Public Schools tailor-made to her dream of earning a degree in education. Through the Pathways program, working paraprofessionals have the opportunity to earn a teaching degree in just 2½ years.

“When my mom first told me about her coming to Rollins, she asked me for permission,” says Topanga. “Which seems funny, but I appreciated it. And I was more than happy because this was a chance for her to get her bachelor’s in something she was passionate about.”

Soon after, Doe’s son, Bobby Sena ’24, also began his college search. Coming from one of the largest high schools in Florida, Bobby gravitated toward the tight-knit community at Rollins too. He saw an opportunity to study political science while embracing his passions for social innovation and sustainability, and it didn’t hurt that he had a built-in support system.

“I already had my mom and sister here, and then COVID-19 happened and the college experience was looking very different,” says Bobby. “At a time when so many things were far from perfect, Rollins was.”

“He has prospered so much here,” says Doe, pointing to Bobby’s involvement with the Bonner Leaders service learning program and his work as a sustainability intern for the City of Winter Park. “He has just flourished. I think he was destined to be at Rollins. We all were.”

Being at Rollins at the same time has benefited all three students on multiple levels—whether it was helping each other out when one was sick, borrowing a philosophy textbook for a class two of them were taking, meeting up at Olin Library to study together, or running into each other on campus (Bobby can regularly be found playing spikeball on Mills Lawn).

And while the three family members thrived at Rollins, they all maintained independent college experiences, pursuing their own passions.

“We live three separate lives here, and Rollins has a great way of accommodating that,” says Bobby. “But even though we all have our own interests and hobbies and do different things every day, we always find some common ground through our Rollins education.”

Despite all being on campus, the family still had to prioritize seeing one another in the midst of their busy schedules.

“When my mom first started attending classes, we would make it a point to go eat at Dave’s Boathouse together,” says Topanga. “Just to study and talk about what we were learning.”

For these tight-knit Tars, keeping those relationships strong meant everything.

“Growing up is really tough, and in college, I think that’s when you traditionally grow up the most,” says Bobby. “So it was nice knowing my mom was here and we could uphold our relationship as mother and son—that never dwindled. Our connection actually became stronger, and we’ll be a part of the same alumni network too.”

Doe agrees as she reflects on how meaningful sharing this experience with her children has been.

“Not only did I get to watch them grow mentally and physically these past few years,” she says, “but my kids got to see me mature even at my age too. Watching that happen simultaneously is such a beautiful thing. We literally grew together on this campus.”

From their first days on campus, each member of the Sena/Doe family found their own way to get involved. Bobby leaned into his passion for politics and sustainability, becoming active in student government. Doe forged relationships with professors and her Pathways cohort while navigating two jobs and attending evening courses. And Topanga held internships with multiple creative agencies while maintaining a work-study position in the business department and serving as an EMBARK ambassador for the Center for Inclusion & Campus Involvement, where she has helped other underrepresented students acclimate to college life.

“I never thought I could have a child who would do all those things,” says Doe. “I never saw that in the Hispanic community where I grew up. Never in my wildest dreams would I imagine my kids at an institution like Rollins—that just didn’t happen for us.”

On May 7, Doe graduated from Rollins—a full-fledged teacher with newfound confidence—as the Hamilton Holt School’s 2022 Outstanding Graduating Senior with a 4.0 GPA. She had the honor of delivering the commencement address, and it was an honor and a responsibility she didn’t take lightly, especially as a mother.

“My kids got to see their 48-year-old mom accomplish this dream, and now they know anything’s possible,” she says.

While their studies have put them all on a different trajectory, these three Tars will continue to nurture the ties that bind.

“Recently, we all happened to be on campus and sat down in a gazebo by Lake Virginia,” says Doe. “It was kind of cool catching up with them on a different level because it wasn’t at home where I was Mom and they were my kids. They’re young adults, and I can appreciate them in their own right, like friends. They have their own minds, and I’m just intrigued to see where we all go from here.”

As a varying exceptionalities instructor at Cypress Creek High School, Doe has now fulfilled her lifelong dream of having a classroom of her own, and Topanga will be moving on to career opportunities that capitalize on her success in business management.

“It’s been meaningful because I didn’t have to go on my college journey alone,” says Topanga. “I’m so appreciative of my family and how we have a second home at Rollins.”

After mother and daughter’s dual graduation ceremonies, there were two full days of family celebrations to mark this milestone moment.

“I was in it to see them walk across the stage … and to get some good food,” laughs Bobby.

The lighthearted yet laser-focused extrovert will be carrying on the family namesake at Rollins, and next up is a congressional internship on Capitol Hill this summer. Long-term, he has his eye on a bid for public office.

“I want to keep working on social entrepreneurship and getting involved on a governmental level to make real change.”

His first platform? “I’d encourage every parent to go to the same college as their kids,” he says with a grin. “It’s given us such a meaningful experience and has forever strengthened our bonds as a family.”