Felicia Hutnick ’79 and Teresa Kaiser ’19 are the top-ranked mother-daughter doubles tennis team in the nation.

Felicia Hutnick ’79 and Teresa Kaiser ’19 have always thrived as underdogs. Both are cold-weather natives who walked on to the Rollins women’s tennis team, only to wind up earning scholarships and playing as high as No. 2 singles.

Kaiser, a lefty, provides the power and pop. Her righty mom supplies the consistency and touch.

“We’re very easygoing,” says Kaiser, “but we love coming out from nowhere and surprising people.”

Rising to the Top

That element of surprise can be traced to 1976 when Hutnick first swung a racket at Rollins. The high school star from Connecticut so impressed Coach Mary Virginia “Ginny” Mack that she put her at No. 3 singles on a nationally ranked team.

“Rollins was always known as the tennis school,” says Hutnick, “and I wanted to be part of that. Coming down to Florida meant I could play every single day, and I didn’t have to play indoors.”

Hutnick, a business administration major and three-time NCAA Division I All-American, went on to compete at Wimbledon, the U.S. Open, and Australian Open. She rose to a world ranking of 91st during five years on the pro circuit.

One of her greatest victories was a thrilling comeback over Ilana Kloss (life partner of tennis legend Billie Jean King) to qualify for the 1981 U.S. Open. That same tournament, she also advanced to the quarterfinals in doubles with partner Renee Richards.

Kaiser, who compiled a 45-28 collegiate record in singles and 49-37 in doubles, graduated this past weekend—exactly 40 years after her mother—with a degree in business management. Then it’s likely on to Boston, where she’s interviewing for jobs in business strategy and data analytics.

“I’ve squeezed everything I can out of Rollins,” says Kaiser, a Kappa Delta who served on the academic honor council and created a writing club, 80 members strong, called More Love Letters. “But it always comes back to how tennis has provided such a community for me. I love, love, love being a student-athlete.”

Ahead of the Game

Hutnick looks at her daughter and marvels at the level and year-round commitment of today’s collegiate tennis scene—not to mention the academic rigor.

“I don’t know if I could be a student-athlete today,” she says. “The morning workouts and the mental work and the classes. It really makes me respect everything Teresa’s accomplished.

“When I was at Rollins, it was a lot less intense. We never did drills. It was just, go out to the court and hit some balls. Ms. Mack, our tennis coach—she used to call us all ‘chickadees’—she’d always say academics is No. 1 but tennis is right after that. But when she left the room, I’d say, ‘listen, girls, we’re here to play tennis, so focus on that.’”

Retiring from the sport in 1983, Hutnick moved to San Francisco, where she found success in sales with the Thorlos sock company. She married John Kaiser in 1991, eventually settling in Omaha, Nebraska, and raising three daughters, all with the middle name Hutnick.

In March, Hutnick joined her daughter at Alumni Weekend, taking part in the women’s tennis reunion. As a token of her gratitude for Rollins’ multigenerational impact, Hutnick recently donated to fund the position of assistant women’s tennis coach, building on a family legacy that began more than four decades ago. 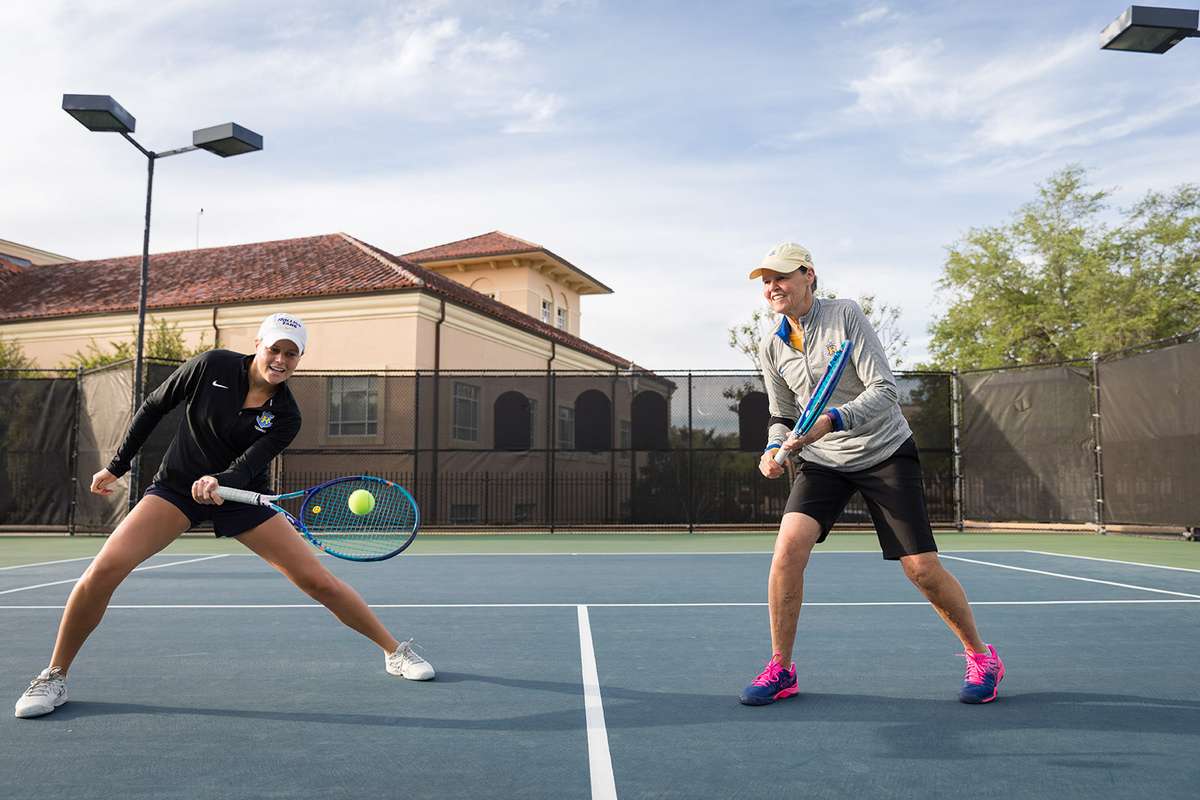 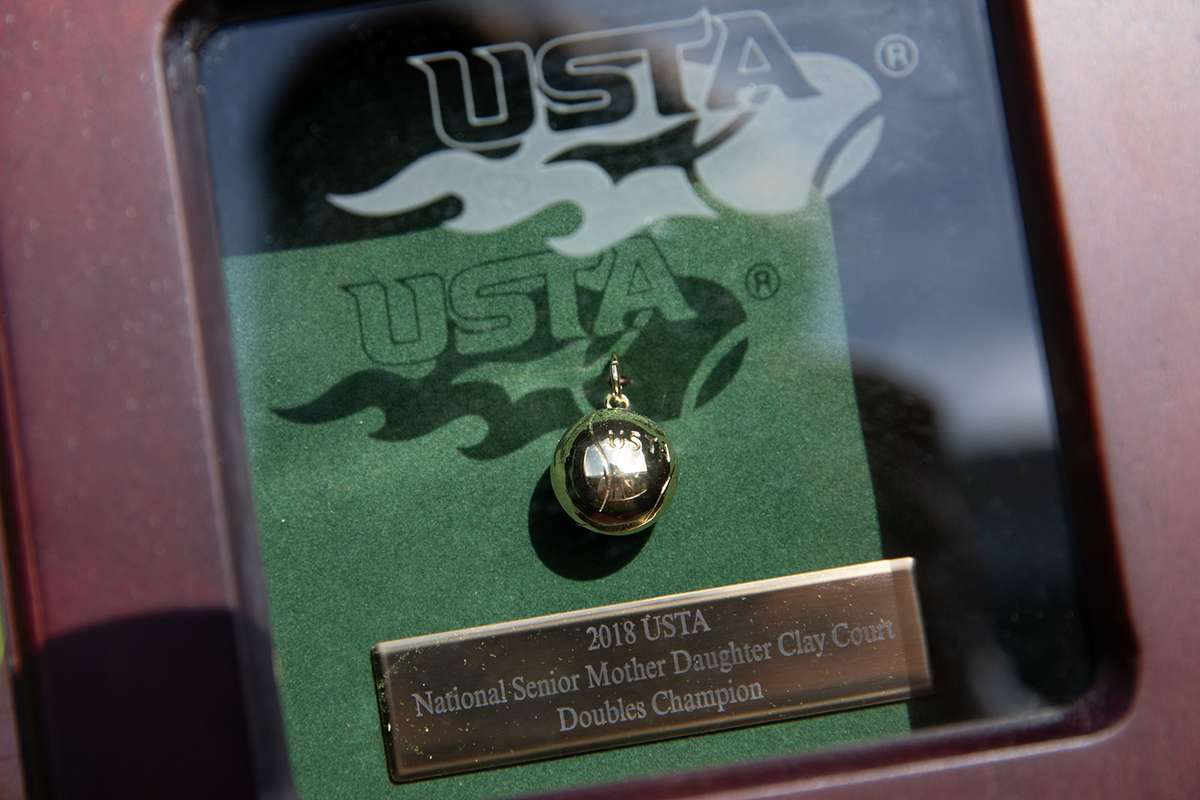 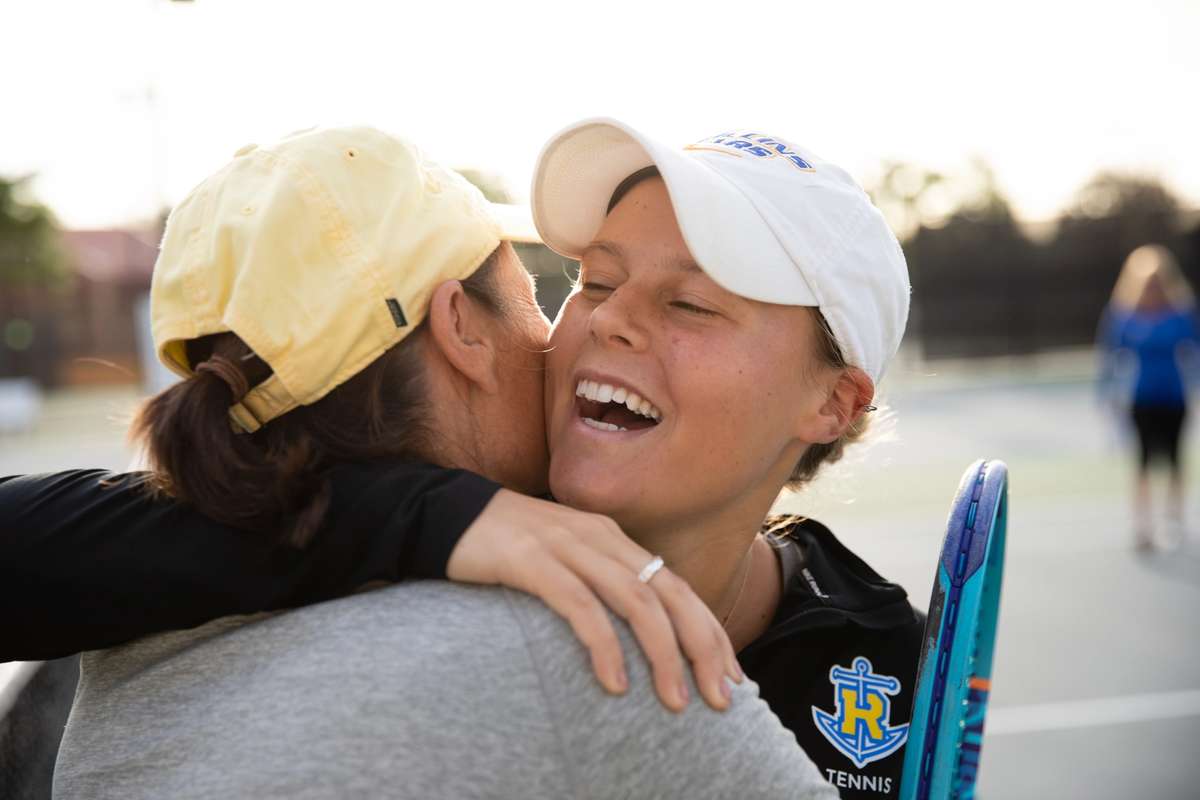 Looking back, one of Kaiser’s favorite memories as a Tar was walking past her mom’s Hall of Fame picture in the Harold & Ted Alfond Sports Center. It always brought a smile to her face, and she never ceased pointing out the connection to her friends.

“My mom and I are extremely close, and we have been pretty much forever,” says Kaiser. “Now that we play together, it’s a whole new aspect because we’re working together as a team. We’ve got the strategy down, so it’s very natural for us, even when it’s a tough team. We’re both grinders who don’t like losing.”

Even though it seems she was destined to attend Rollins, at first Kaiser wanted to head in a different direction. A four-year all-state player in high school, she looked at colleges across the country but never found one she truly loved.

“Mom did a really good job of not pushing me to go to Rollins, even though she really wanted me to,” admits Kaiser. “She knew that if she pushed it too much, I wouldn’t want to go there—typical teenager thought process. Rollins was just in the background for me, waiting for me to choose it, and it really was my best option.

“I’ve learned so much. The small class sizes and building relationships with your professors—that’s what it’s all about. If you want to be seen and heard, you can easily do that at Rollins. You won’t get lost in the crowd or just be known as a student-athlete.”