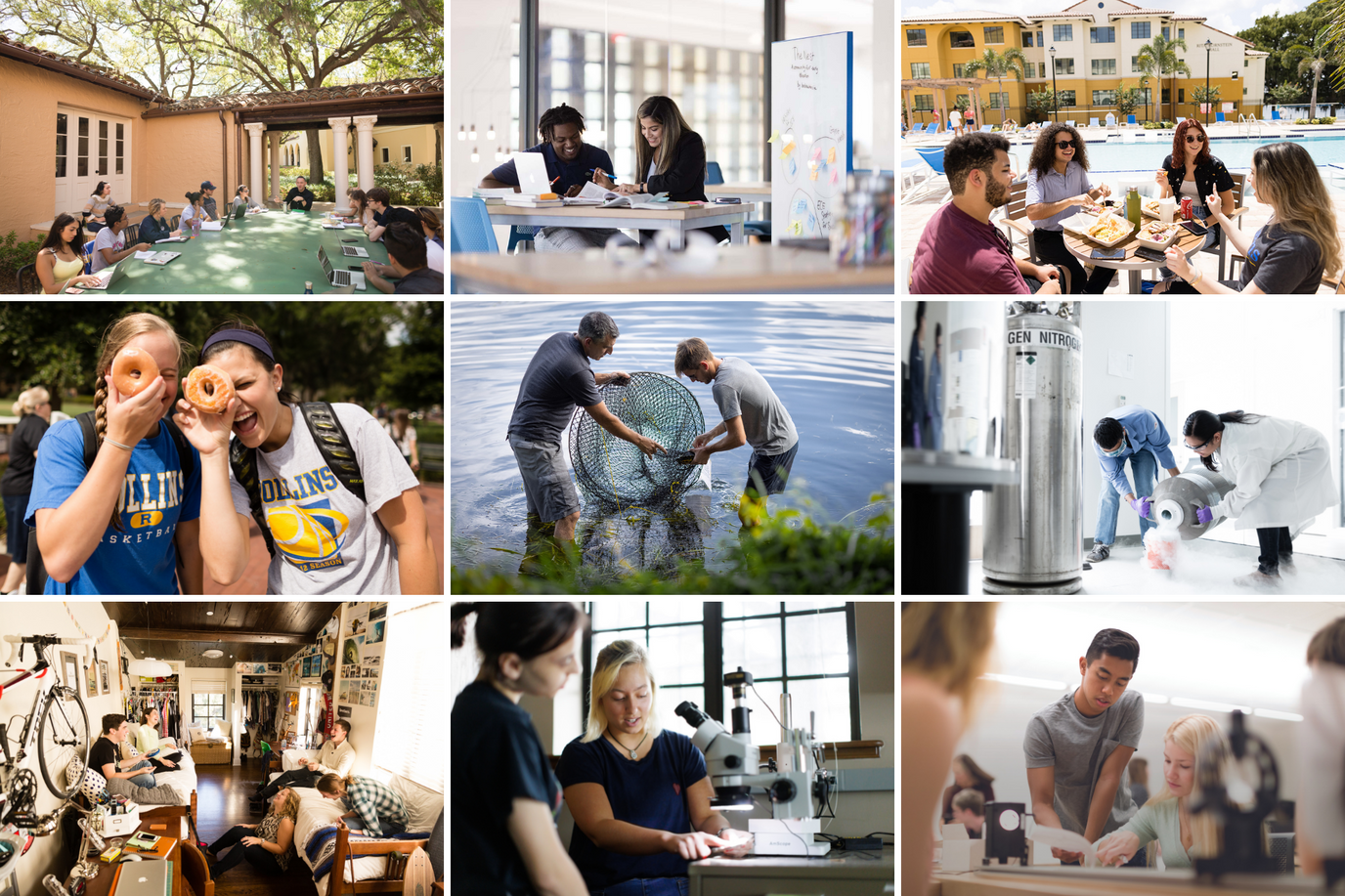 Your first year at Rollins will be full of firsts—from meeting your roommate to studying new subjects. Explore the many different ways we make sure your journey of a lifetime gets off to a great start.

We’ve worked hard to crack the first-year code by crafting supportive, personalized experiences to help you transition to living and learning at Rollins. And while everyone’s first year is as unique as they are, they all have
a few key things in common like a focus on community building and mentorship. It’s one of the reasons U.S. News & World Report ranks Rollins’ first-year experience among the best in the country. Here are just a few of the ways we ensure that the first year of your #RollinsLife is nothing short of spectacular.

The cornerstone of your first year is your Rollins College Conference (RCC) course, a seminar-style class designed for incoming students that acts as a roadmap for your Rollins journey. Whether it’s learning about the science behind the headlines in Physics for Future Presidents or creating your own
spirit animal in Foundations in Sculpture, your RCC course provides a foundation for the kind of interdisciplinary, experiential, and relational learning you’ll do at Rollins.

“My RCC was an opportunity to explore a field of study that I didn’t even know was possible,” says Toppin, who returned to her RCC as a peer mentor. “It was cool to see first-years embrace the same spirit of curiosity that I felt.”

Even before you’ve fully moved into your dorm room, you’ll have the support of Rollins’ peer mentors, second-, third-, and fourth-year Tars who are ready to help you out with everything from preparing for your first class presentation to deciding which meal plan to choose. It’s just another way that Rollins has mastered mentorship in and out of the classroom.

“As soon as I came to Rollins, I realized there was support everywhere,” says Raul Tavarez Ramirez ’21, who also served as a peer mentor and an assistant hall director and is now a trade delegate at the European Union. “It’s not a place where you show up and people tell you what to do. It’s a place where people listen to what you want and then work with you to make it happen.”

When we say we empower you to pursue a meaningful life and productive career, we mean that from day one. Your RCC instructor also serves as your first-year faculty advisor, helping guide you through your foundational courses as you start discovering what makes you tick.

“[Political science professor] Mike Gunter helped me combine my interests in political science, international relations, and environmental activism into a plan,” says Tavarez Ramirez, who put all three into action as a 2019 U.N. Millennium Fellow focused on building awareness around responsible consumption.

Cohort-based programs like Bonner Leaders, a national organization that
pairs young campus leaders with community organizations, and EMBARK, a peer-orientation initiative designed for students from underrepresented backgrounds, offer opportunities for connecting with like-minded Tars before you even start at Rollins.

“I made my first friends at Rollins through the Bonner Leaders orientation before the semester started, and those relationships have carried throughout my four years,” says Renee Sang ’21, a double major in critical media and cultural studies and studio art.

Sang’s experience working alongside farmworkers just 40 minutes from campus was so impactful that she went on to partner with the Farmworkers Association of Florida to produce a documentary focused on issues facing migrant workers.

Focused on integrating experiences both in and outside the classroom,
Rollins’ Living Learning Communities (LLC) encourage inclusive, holistic
learning and community building. In LLCs like Ward Hall, you’re housed
according to your RCC, which lets you experience college life with a group of
classmates who share similar interests.

“Living and learning together makes it easier to branch out,” says Tavarez Ramirez, who made some of his best friends his first year. “It builds community and kick-starts your network.”

Each year on SPARC Day—Rollins’ annual day of service—incoming Tars
get a small taste of what can happen when they put their ideas to work in
the world.

“Everything came together in my Rollins journey because of SPARC Day,” says Sunny Toreihi ’20, who will begin pursuing a law degree focused on gender rights at Georgetown next fall.

Volunteering at the Pace Center for Girls through SPARC led Toreihi to seek out service opportunities focused on domestic violence and political advocacy as a Bonner Leader.