What It’s Like ... to Present Research at a Professional Conference (without Leaving Campus) 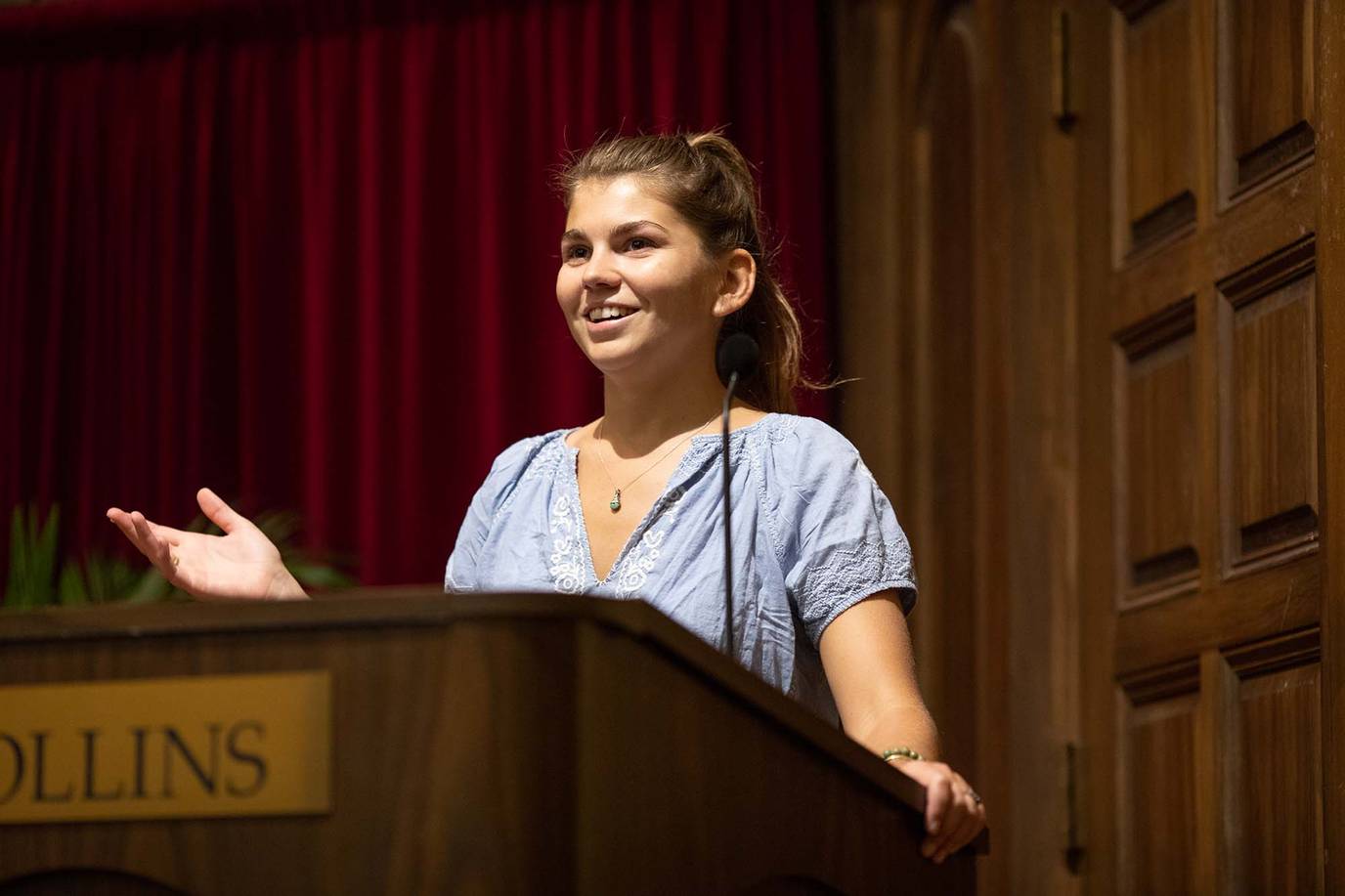 Go behind the scenes of Rollins’ first-ever Latin American Studies Symposium, where college students and faculty from around the country share original research and lively discourse.

Originally organized and hosted by Birmingham Southern College, the Latin American Studies Symposium now finds a new home at Rollins for the next five years. The symposium gives undergraduate students the opportunity to present their original research in a public setting among a group of peers and faculty passionate about the region, its rich culture, and the challenges it faces. This year, participants hailed from nine other institutions, including Davidson College and Baylor University.

Emily Wayne ’18, double major in environmental studies and anthropology with a minor in Latin American & Caribbean Studies, was the first to present, setting the tone for the day’s event.

I’m in my senior year, so I’m pretty used to giving presentations, but I was a little nervous for this one. It was the first time I was going to present for an audience beyond my fellow classmates and professors. It was a packed house—from members of the Rollins community to students and professors from colleges and universities around the country who had traveled to campus for the event.

And I was up first. I took a deep breath, steadied my nerves, and luckily my words followed suit. Passionate about culture—Latin American culture, in particular—I presented research from a paper I had written for my Music & Politics Neighborhood capstone course that explored a topic of my own creation: the connection between Brazilian funk music and the hegemonic power structures in the favelas, or slums, created by organized crime. I discussed how it was important to analyze the different realities and perspectives of the people in Rio de Janeiro in order to understand how the cartel culture is ingrained in their society. Yes, the cartels hand out alcohol and drugs and are involved with perpetuating crime on the streets, but they also maintain soccer fields and fund day cares—things the Brazilian government won’t do.

Through my ethnographic music research, I explored how music affects, reflects, and forms societies, and in this case, how the Brazilian funk music is described by many as a means of liberating oneself from the strains of poverty through energetic dance, loud sound, and community gathering. The cartels have appropriated this genre of music and used it to create power, to maintain respect and control, and to stage their identity as social bandits.

Presenting my research to this audience was different than presenting in class, where the purpose was more to teach everyone about the subject. Everyone attending the Latin American Symposium was operating from a knowledge base in the subject matter, which elevated the conversation, and the rhetoric was much more formal. It really gave me a firsthand look at what graduate-level research would be like, especially when it came to pointed questions from the audience. One of the anthropology professors from another university asked if we perhaps place too much blame on what happens in Brazil on the cartels and the drug trade, while another, a professor of Haitian descent, asked if I’d come across any similar research in Caribbean nations.

This experience helped me speak with confidence about my research and my ability to interpret it while also giving me a glimpse of what kinds of expectations lie ahead. After taking this next year to work as an energy consultant for 3D Solar in Orlando, I plan to attend graduate school, and now, thanks to this experience, I have an idea of the level of research that awaits me.

I’m so thankful to Rollins for the emphasis it places on studying a variety of subjects, or I might never have had the chance to participate in this symposium. I came to Rollins curious about the world, and now, as I get ready to make my way into that world, I’m prepared with the skills and resources to succeed at what comes next.

Learn more about Rollins’ expert faculty and our unique mentorship model by scheduling a visit to campus today.