The Re-Education of Rwanda 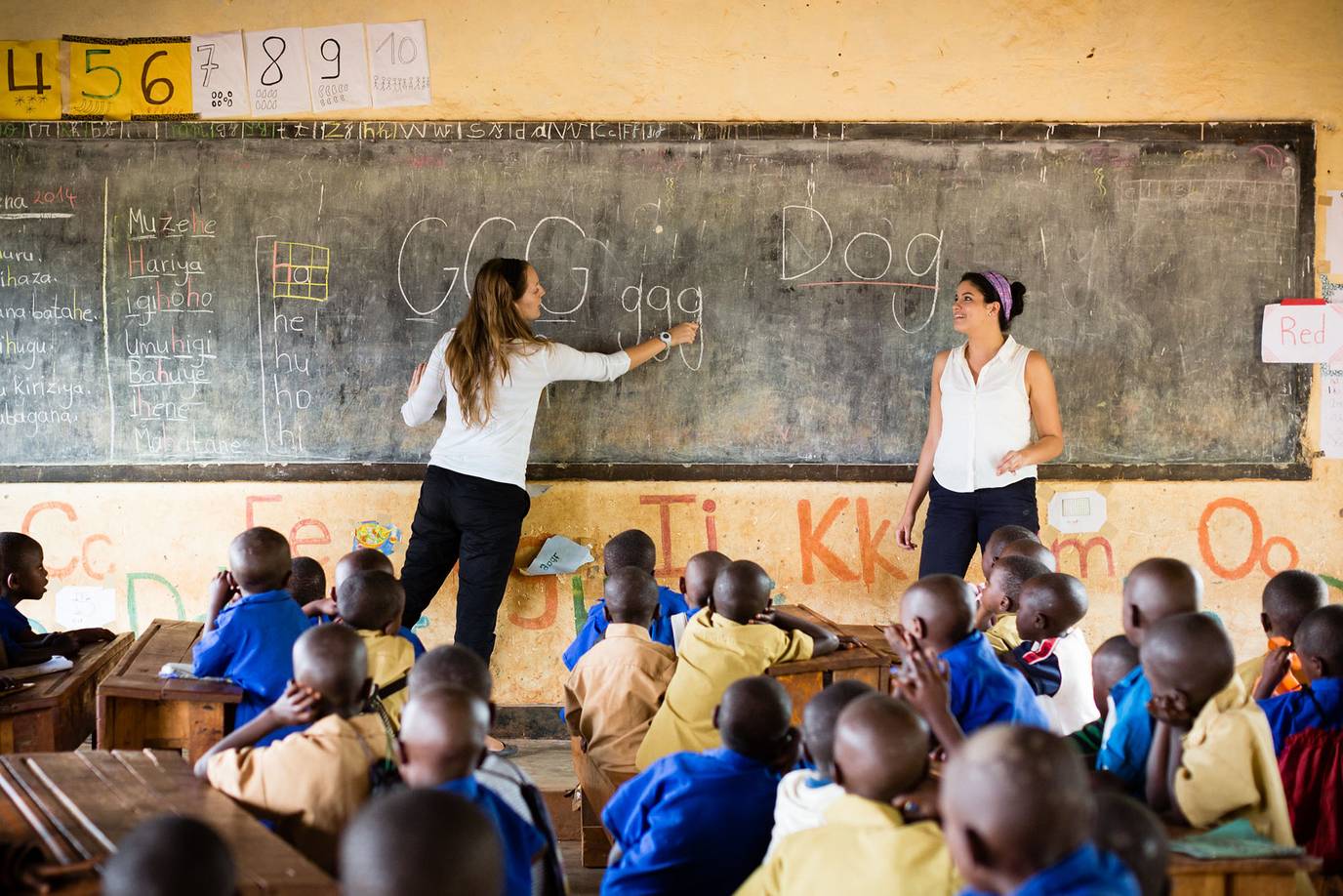 Professor Scott Hewit is determined to change education in a small Rwandan village where the lights don’t always turn on and the psychic scars of genocide are all around.

In 2007, Rollins Associate Professor of Education Scott Hewit visited schools in Liberia, an African country beset by civil war, for 10 days to observe, learn, and help. The education system throughout the country and in the capital of Monrovia—named for U.S. President James Monroe, who wanted freed black slaves to resettle there—was, in Hewit’s words, “not in good condition.”

But he was struck by the potential, about how the citizens struggled with so little.

“I came away from that visit really wowed by how different conditions could be,” he says. In America, “we have more than enough resources to provide a real education to every child. It’s remarkable to me that people in [the U.S.] don’t have the will.”

He planned to go back, but conditions in Monrovia had deteriorated. The capital wasn’t safe.

Instead, a friend referred Hewit to a clinical psychologist who had started going to the Hameau des Jeunes orphanage in Musha, a small village in rural Rwanda. The country is just two decades removed from a genocide in which at least 800,000 men, women, and children were slain in a matter of weeks while the world watched and did nothing. Located about 25 miles east of Kigali, Musha was the site of a major massacre during that genocide: 1,200 people died in a church where they sought refuge when militiamen—sympathetic to the regime and armed by the army—fired guns and grenades inside and set the church on fire. The children of the orphanage were victims of the genocide, those whose parents, siblings, or relatives had died or been unable to care for them. Eventually, those kids grew up and aged out; they were replaced by others—genocide or no, rural Rwanda can be difficult terrain.

That psychologist, Ed Ballen, visited the orphanage for several years as a volunteer, says Hewit, but eventually “he realized he had only a small piece of their world.” In other words, life in Musha for these children went beyond the orphanage’s walls—it extended into the village and into the school. “He needed to bring some educators over,” says Hewit.

In 2008, Ballen formed the Rwanda Education Assistance Program (REAP), an organization created to “harvest each child’s educational potential in the face of multiple challenges, including poverty, HIV, and post-genocide trauma.” REAP focused on the Duha Complex School—3,000 students in the equivalent of grades 1 through 10—which the kids from the orphanage attend. The idea was to create a sustainable educational model there, one that didn’t require intervention from Westerners or anyone else, one that didn’t need constant influxes of foreign money, one that could be replicated again and again, in villages and towns all over Rwanda.

Most of Duha’s students come from nearby villages; only about 5 percent come from the orphanage. “The children at the orphanage have much more than the children in the villages,” says Hewit. “They’re fed better, clothed better. You can almost pick them out at school.” Many residents of the village live in houses made of wood and mud, and basic subsistence can be difficult.

In the spring of 2010, Ballen invited Hewit to visit the school and join his team. Hewit accepted.

The team had two guiding principles: 1. Know nothing. 2. Build relationships. What the Rwandan teachers and students did not need was a bunch of Westerners coming in and telling them how to run their school and manage their curriculum. And they needed to build relationships to be effective—after all, says Hewit, “Since the genocide, there had been a real decline of trust.”

They went in with big ears and small mouths, asking questions instead of offering advice. “They told us they wanted to learn to speak English,” says Hewit.

To understand why that was such a priority, some backstory is required.

In October 2008, a few months after Ballen formed REAP, the Rwandan government decreed that the country’s new official language would be English, not French. This would be the language of education, commerce, and government. The government’s reasoning was that French—the country’s language since the Belgians colonized it during World War I—was dwindling on the world stage. World leaders spoke English. If Rwanda wanted to be part of the world economy, it needed to speak English also.

There was more to it than that, of course. The government accused the French of arming the former Rwandan army as well as militias from the Hutu ethnic group; together the army and militias massacred the Tutsis and some moderate Hutus. The language switch offered a break from the past. Regardless of the motives, though, English-speaking investors are entering the country with frequency, looking for opportunities in mining, energy, and ecotourism.

But even though the government changed the national language from French to English, few of its citizens were fluent in either. In fact, less than 5 percent spoke English and less than 5 percent spoke French when the government announced the change. Most—approximately 90 percent of Rwandans—spoke (and still speak) Kinyarwanda. And there’s some pride in that. For starters, it’s a language indigenous to the area; it is spoken by the Hutu, the Tutsi, and the Twa ethnic groups; and it is frequently spoken in daily life and at official public functions. And until that government decree, it was also the language of instruction in primary schools, even though relatively few textbooks and books were available in the language.

The problem was that the country’s primary teachers—the ones who were now supposed to teach English to Rwanda’s next generation—weren’t exactly fluent. They couldn’t comprehend the English-language textbooks they were provided, which made teaching the language to students challenging, but they risked losing their jobs if they didn’t.

And so Duha’s teachers asked to learn English. They also asked to learn about computers. This too has become a governmental edict; the world is digital, and Rwanda doesn’t want to be left behind. Earlier this year, the government announced that its teachers would be evaluated based on how well they taught English and incorporated technology into their classrooms.

Of course, at the time of Hewit’s first visit, Duha didn’t have electricity or even clean water.

And the teachers were still struggling to teach English. They would stand at the front of a class of 50 to 60 children, four or five to a bench. They would take out a tattered English textbook, one they had difficulty reading, reproduce a particular sentence on the chalkboard, then ask the kids to do the same. This system did not produce optimal results.

To develop the students’ English skills, the REAP team would first need to develop the teachers’ skills. And Hewit knew this wouldn’t be accomplished during a single trip. In fact, he’s gone back six times, most recently this past summer. On these trips the team has been working with the teachers in small groups, building their vocabulary through storytelling, songs with physical movements, and debates about subjects like whether it’s better to live in a city or a village. With the more advanced teachers, they use role-playing to develop critical-thinking skills along with vocabulary. They also developed a Saturday morning teacher training program, in which teachers come in and learn on a laptop. The teachers receive bread and a bottle of Fanta, and the program—training 20 teachers—costs about $35 per week.

REAP also partnered with the community to run electricity from the village to the school. Back home, Hewit started the Rollins Laptop Legacy Project, allowing students and faculty to donate their old laptops, which are repaired by Rollins’ IT department, to the school.

In time, REAP’s efforts began to pay off. The Duha Complex School has better attendance and better performance marks today than it did four years ago, when Hewit first boarded a flight to Rwanda. The teachers are meeting on their own regularly to improve their pedagogical skills, and the teachers’ and students’ English is beginning to improve. But there’s still a ways to go.

“We’ve been there five years,” says Hewit of REAP. “We plan on being there another five.”

Abby Bragg New ’06 ’13MED, then a graduate student, took notice of what Hewit was doing in Rwanda and wrote the preface to a paper he was writing about the country’s history of education. As a result, she became immensely interested in his work and wanted to go with him.

For the next 10 months or so, says Hewit, he considered her offer. Rwanda wasn’t an easy place for an independent study. Electricity was spotty. Hot water was nonexistent. Creature comforts were in short supply. But finally, in the summer of 2012, he agreed to let New go with them. The next summer, they went again. Then this summer, after she’d graduated, she went again.

For the past nine years, New has taught at a Title I school in downtown Orlando, and, she says, her students here mostly face “generational poverty. In Rwanda, it’s situational—it’s where they are. There’s just not a lot of opportunity. The kids view education so differently. The need to learn from the kids in Africa is so incredible.”

Her first trip to Musha was for three weeks, and she focused on building relationships with the teachers at Duha. She, Hewit, and other REAP volunteers worked with translators and the teachers, co-teaching some classes, developing English-language dialogues that involved everyday activities. “The teachers were resilient,” she says. “It’s a rural school in the middle of nowhere. They walk two hours a day [to/from work], clean their own classrooms, teach 65 students per class.”

After New’s first trip, other Rollins students began asking if they could go. The education department had been talking about developing field-study opportunities for students. In early 2013, Hewit proposed a student trip to Rwanda, and the College approved it that spring. Students had until November to apply—and they did. Hewit had twice as many applicants as he had spaces. He interviewed the applicants and told them how difficult it would be: no internet, no hot showers, a 2 1/2-mile walk uphill every day. They were undaunted.

In the end, he took two grad students and six undergrads. Most, but not all, came from the education department. New came along too, as did Professor of Communication Studies Sue Easton and Rollins photographer Scott Cook. There were 13 people in all, ranging in age from 19 to 60-something.

“I couldn’t have been happier with that group,” says Hewit. They had raised money before the trip for books, games, and puzzles. They read to the children, observed classes, demonstrated new techniques that incorporated technology and music to help teach English, and partnered with the teachers.

It was an incredibly rewarding experience, says Hewit, and he’s going to bring a new group of students at the earliest available opportunity: 2016. And he and other members of REAP are going to keep going back until their mission is accomplished.

“Five years from now, our goal is to have a poor rural school that functions at a high level on its own,” says Hewit. “They have the resources, the talent, and the sense of responsibility to carry out much higher education.”