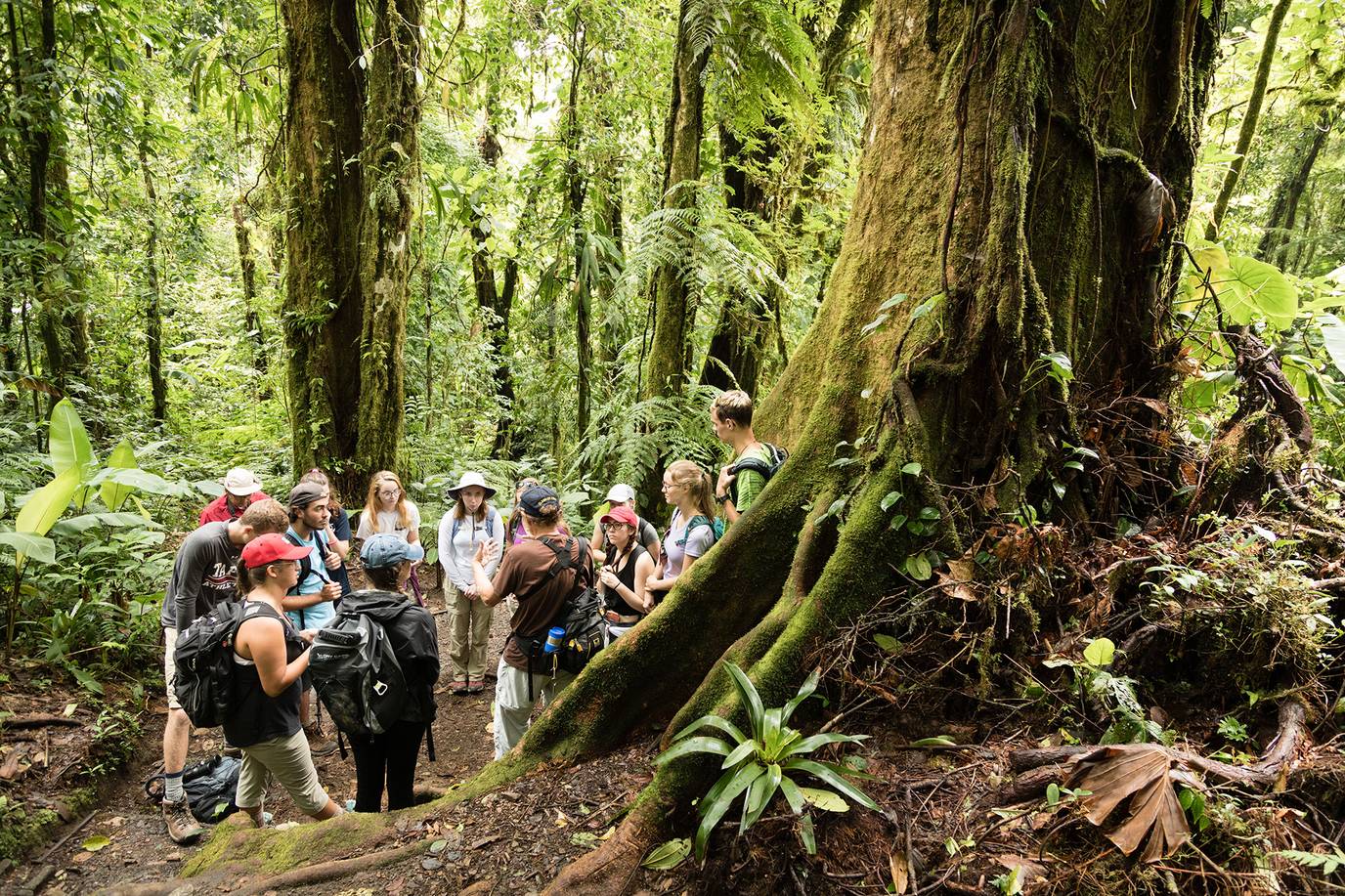 Environmental studies professor Barry Allen has been leading field studies to Costa Rica for more than two decades, each year preparing his students to become the next leaders in conservation.

It’s 5 a.m. and a cool mist hangs like a light blanket overhead. Mikayla Panariello ’21 can’t seem to peel her cheek away from the van’s window as she strains to take in every last drop of the view on the steep climb through Costa Rica’s Monteverde Cloud Forest Reserve. When she finally reaches her destination—the jumping-off point for the day’s hike—her journey has just begun.

Hazy layers of clouds greet her at eye level as she sets out on a trek through the elfin woodlands and towering rainforest. She passes stands of strangler figs and bursts of orchid blooms stretched out in a Dr. Seuss-like fashion when, all of a sudden, she sees environmental studies professor Barry Allen’s face swell with excitement. He has spotted one of the rarest birds in the cloud forest, the endangered resplendent quetzal, its iridescent green plumage blending almost magically with its verdant surroundings.

“I want that,” Panariello thought to herself. “That feeling of sheer joy and purpose and affirmation.”

Unbeknownst to her, she was about to get it. Minutes after Barry (as his students call him) had his quetzal moment, Panariello came upon a mama sloth and her baby, a long-held dream of hers to see in the wild, perched perfectly in a tree as if they were there just for her. While tears spilled down her face, Panariello’s future came into focus. This first-year student came to Costa Rica thinking she’d pursue marine biology at Rollins and left knowing she’d devote herself to environmental studies, to preserving the habitats of her newfound friends.

“I was inspired by the beauty of this place, of the passion and commitment of the locals and activists and scientists dedicated to improving this land that they love,” says Panariello with a wide smile.

Before World War II, Panariello explains, almost 75 percent of Costa Rica was covered by forest. Over the ensuing four decades, however, significant portions of the forest were cut to grow coffee and raise cattle. But thanks to conservation efforts, the forest is coming back. In fact, about 30 percent of the forest that exists now didn’t in the early 1980s. The people who cared enough to revitalize this land did so for conservation as well as their economy.

“This trip made me realize I want to do what Barry does,” says Panariello. “I want to be one of those people who goes into countries that have so much to offer and help them grow and flourish and teach others about these rich environments.”

After traveling to Costa Rica, “ecotourism” was no longer a buzzword for Panariello—it was a calling. She decided to double major in environmental studies and political science with a minor in sustainable development, a unique combination encouraged and supported by her advisor and professors. She plans to study international relations with a focus on environmental policy in graduate school at Columbia or Tufts. Confident in the hands-on, real-world experience afforded her at Rollins, Panariello ultimately has her sights set on working for the United Nations Environment Programme as a global advocate for conservation and sustainable development.

“Everything I learned about Rollins on my [campus] tour came alive on this trip,” says Panariello. “To explore until you find your passion, to believe in yourself and your pursuits, and not to shy away from forging your own path.”

Where It All Started

When Barry Allen came to interview at Rollins 36 years ago, it turned out to be Fox Day.

“I walked onto campus and it was empty,” he says. “All my meetings were cancelled, which is probably why I ended up getting the job—no time to make any enemies,” he laughs.

Allen founded the environmental studies department at Rollins in 1982, making it one of the first departments of its kind in the country. He started taking students to Costa Rica back in 1995 to give them an up-close, hands-on look at one of the world leaders in sustainable development and national parks.

“Costa Rica is attempting to become the first carbon-neutral country in the world,” he says, “and we, in the U.S., have so much to from them.” Allen explains that Costa Rica is a center for biological diversity, and because of its location on the land bridge between North and South America, as well as the spine of mountains in the center, there are 14 life zones represented.

The program has since grown into three different 10-day field studies. The First-Year Field Study brings a group of 12 first-year students to Costa Rica before they ever attend a class at Rollins. Two others are aligned with specific courses, National Parks and Protected Areas and this past year’s Environment and Development in Central America.

While each trip serves up a different itinerary, they’re all focused on Allen’s mission to showcase the interrelationship between humans and their natural environment, providing students an unmatched opportunity to connect with each other, to spark an interest in global affairs, and to see firsthand how a country’s focus on environmental conservation can define its economy and culture.

One of the College’s longest-tenured professors, Allen shows up every day—whether it’s at the top of the Monteverde Cloud Forest or a classroom in the Beal Maltbie Center—to push his students to be better than they were yesterday by committing to work that’s bigger than themselves.

There’s nothing quite like sharing an experience in a foreign place to bond you to another person, and that’s exactly the thought behind the First-Year Field Study. Students travel together before the rush of that first semester, helping them transition to college feeling less overwhelmed and more confident. The results are telling. Stats show a higher retention and graduation rate for First-Year Field Study participants over the general population.

“Having this experience before school even started was so important,” says Heather Schleiffer ’16, an environmental studies major who now works as a storm-water field consultant in Central Florida. “It was like diving straight into the next step of my life head-first but with a support system. The friends I made on that trip are still some of my best today.”

The August 2017 trip was no exception. More students applied this past year than ever before, and the 12 who were selected are forever grateful. Allen explains how the students get a chance to see the interconnectedness of an environment—from the flora and fauna to the locals and activists working to protect it—and how for many of them it’s their first time traveling out of the country.

“This trip made me realize that one person really can make a difference,” says Panariello, referencing their tour guide whose life’s work is preserving the Costa Rican ecosystem. “His daily efforts result in improved conditions and higher chances of sustainability for the flora and fauna that call this rainforest home.” Panariello continues by explaining how much this man changed the lives of all the students, imparting an eye-opening perspective on different ways to approach sustainability and conservation. “I know none of us will ever use a plastic water bottle again.”

For environmental studies major Angelo Villagomez ’04—a senior officer with the PEW Charitable Trusts—the summer he spent studying sustainable development in Costa Rica was the most influential experience in guiding him toward pursuing a career in conservation policy.

“Ideas I learned in Costa Rica have made their way into the work I’ve done in two dozen countries in the Pacific and Caribbean,” says Villagomez, whose focus is ocean and shark conservation.

“In Costa Rica, I learned and saw firsthand how the burden of environmental destruction is rarely carried by the people who benefit,” he says, “but by those who had nothing to do with [the destruction] and who more often than not depended on the resource before it was destroyed or taken away.”

“Before traveling to Costa Rica, Barry had us read about David Brower and his experience with the Sierra Club and the American West,” says Villagomez, “and we focused as much on what he had accomplished in protecting as what he failed at saving.”

This is the approach Villagomez brings to his work on the oceans, facing the harsh realities square in the face and underscoring that there’s no room for compromise on the small areas he’s trying to protect.

In his tenure at PEW, Villagomez has secured the passage of more than two dozen shark conservation laws in Pacific and Caribbean island states and organized an effort that resulted in the protection of Hawaii’s Papahanaumokuakea Marine National Monument—now the largest fully protected conservation area in the United States.

Tyler Kartzinel ’07, a biology and environmental studies double major, shares the same appreciation for his time in Costa Rica, recalling his visit to a restoration site in Guanacaste National Park. Led by a park ranger and scientist, Kartzinel and his classmates hiked through a series of habitats and learned how conservationists were experimenting with different strategies for rebuilding a tropical forest out of a cow pasture.

“Each strategy they tried resulted in a landscape with a different feeling,” says Kartzinel. “I could feel the creativity and passion and sometimes frustration involved in real-world conservation, but I could also sense that something deeply important was happening and that progress was possible.”

That experience in Costa Rica is the reason Kartzinel became a conservation biologist. After graduating from Rollins, he got a PhD in ecology at the University of Georgia, which afforded him the opportunity to live in and conduct research on many of the habitats he’d first encountered in Costa Rica. Kartzinel is currently an assistant professor of conservation biology at Brown University, jointly appointed in the department of ecology and the Institute at Brown for Environment and Society.

Kartzinel says Allen always displayed an earnestness when approaching environmental issues with his students, and he ranks him among the most inspiring and supportive faculty members with whom he’s ever had the opportunity to interact.

“Barry is a role model,” says Kartzinel. “I’m currently developing international field studies of my own modeled on the courses I took with Barry.”