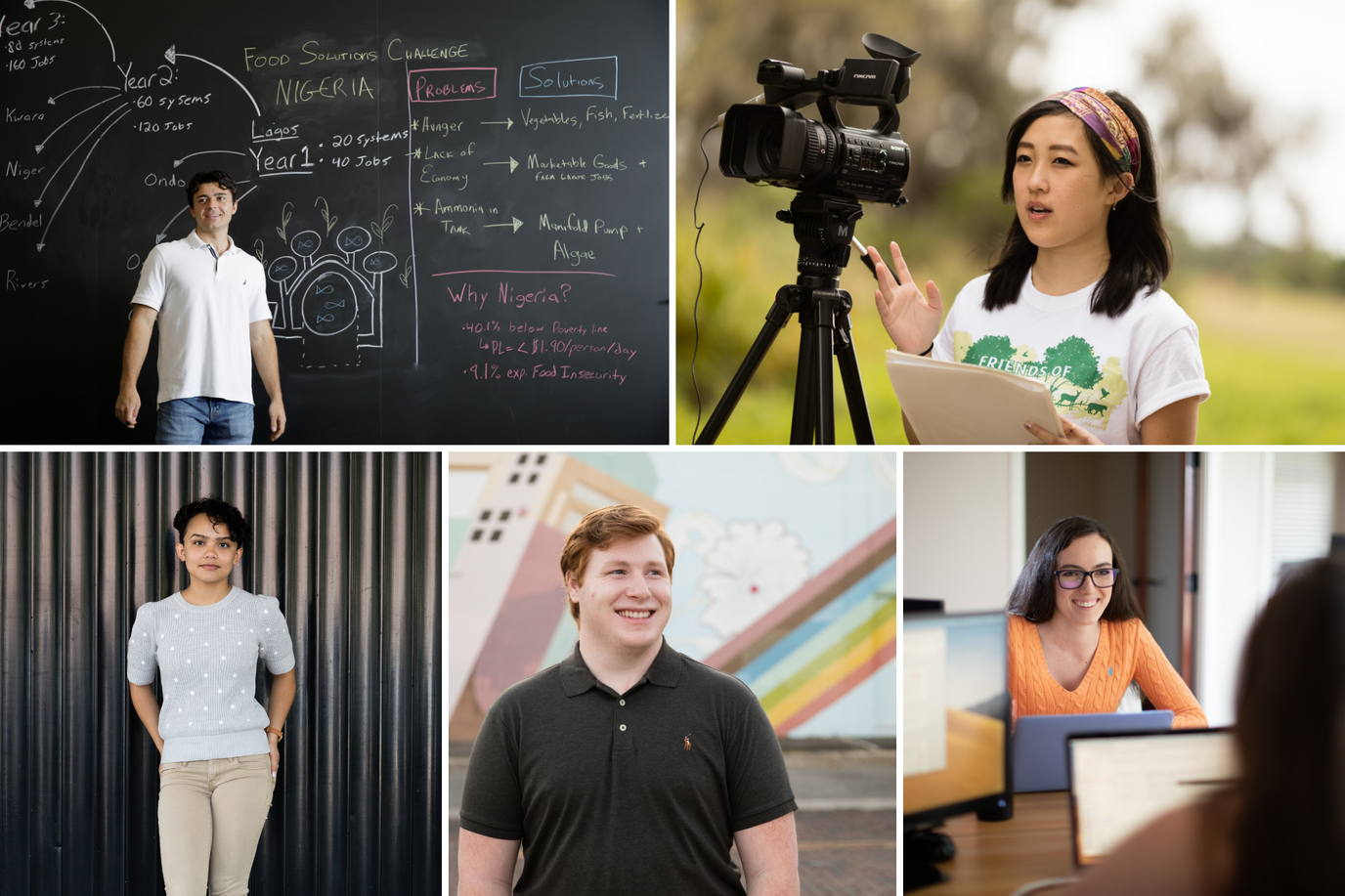 Equipped with 21st-century skills, real-world experience, and lifelong relationships, Rollins grads step into their futures ready to make the mark only they can.

Launching a startup before graduation. Using art to advocate for the voiceless. Fighting for health-care equality. Rollins graduates are prepared to step into the big, wide world because they’ve already tested their ability to make it better.

Through Rollins Gateway—the College’s distinctive approach to liberal arts learning—they’ve taken broad-based concepts and skills like creative problem solving and critical thinking that they’ve developed through our core curriculum and applied them across disciplines and in communities across the world. Expert faculty, staff, peers, and alumni mentors have helped them connect classroom concepts to real-world scenarios, empowering them to chart their own course to personal and professional success.

For Colin Kelly ’19 ’21MBA that course started in marine biology and led to an MBA from Rollins’ Crummer Graduate School of Business. For Wyatt Deihl ’21, it was self-designing his own major in health, society, and medicine and finding ways to forge powerful connections on campus and in the community. For Renee Sang ’21, it was combining interests in the arts and social justice on her path to becoming an activist documentarian.

When our students graduate, they’re uniquely prepared not only to add immediate value to any organization but to continue on their paths of global citizenship and responsible leadership. Explore the journeys of five standout graduates from the Class of 2021 as they take the next steps in their meaningful lives and productive careers.

Kelly’s path to merging interests in biology and business started his second year during an internship at the Cornell Cooperative Extension, an educational system focused on maximizing the state of New York’s agricultural and natural resources. The marine biology major not only immersed himself in the hands-on work of growing oysters to help restore shellfish to the bays, but also educated members of the local community on how they could earn income while promoting environmental justice.

At Rollins, Kelly went on to hone scientific skills through student-faculty research, serve as the president of Net Impact, a Crummer student organization devoted to social and environmental sustainability, and forge invaluable relationships with mentors like management science professor Keith Whittingham and Sergie Albino ’10MBA. An internship at Albino’s clean-tech company ecoSPEARS turned into a part-time position, exposing Kelly to startup culture and solidifying his commitment to sustainable business.

“As a marine biology major, I learned how to read, dissect, and make sense of scientific literature,” says Kelly. “That provided the science background that I needed. Then at Crummer, I learned how to start a business, make connections, and work as an effective leader. My diverse background at Rollins is what has given me the capacity to really make a go of Xhalence.”

Renee Sang ’21 describes digging in the dirt alongside farmworkers in Apopka just 40 minutes from campus as “life-changing.” And it’s because she wasn’t just reading about the political implications of immigration policy or solely researching the effects of pesticides on farming communities—she had the opportunity to experience them firsthand.

While pulling weeds and planting mustard greens, Sang learned about the lives of migrant farmworkers who had left their families behind in Mexico and Honduras and why they’d been lobbying corporate supermarket chains to raise the price of tomatoes one cent per pound. Concepts took on real meaning, and social issues she didn’t even know existed now had a face, a name, and a story to tell.

Sang declared a double major in studio art and critical media and cultural studies, fusing interests in art and film with a newfound passion for social justice. She held internships in Morocco and London in journalism and documentary production, debuted an original art exhibition at the Cornell Fine Arts Museum, and made several documentaries, including Planting Seeds, Growing Justice. That film, which screened at the Global Peace Film Festival, took her back to those fields in Apopka, where she turned the camera on the community organizers working to provide community-garden access to farmworkers suffering from food insecurity.

“Documentary and art allow me not only to be a critical thinker, but they give me a platform to present pressing issues by working with others who have a firsthand account of the subject,” says Sang, who will begin a master’s program in ethnographic and documentary filmmaking at University College London in fall 2022. “I’m grateful that Rollins allowed me to use my skills in this field to develop relationships with people and engage in meaningful dialogue about issues important to them.”

Wyatt Deihl ’21 just became the first person in his family to graduate from college. The recession that began in 2007 left his family reeling, frequently moving, and sometimes homeless. He recalls a turning point, while living in a tent in fifth grade, when he vowed to attend college and interrupt a cycle of generational poverty.

“I see great value in harnessing the knowledge I have gained through my lived experiences to fight for justice for those who lack a voice,” says Deihl, who has already made great headway on this noble, personal endeavor while at Rollins.

Deihl self-designed a major in health, medicine, and society and made quick work of not only getting involved on campus but also blazing new trails. He founded the Rollins Public Health Association, implemented community health initiatives throughout Florida while serving as campus director of the 2019 U.N. Millennium Fellowship, and interned with the LGBTQ+ advocacy group Equality Florida. Deihl was one of only 62 students nationwide to earn a 2020 Truman Scholarship, the esteemed award for students seeking to enter graduate school in pursuit of a public service career.

“I utilized the flexibility in curricula at Rollins to glean a holistic understanding of how sociological systems influence the health and well-being of communities,” says Deihl, who will begin a master’s program at the Yale School of Public Health this fall. “I owe a great deal of my success to the opportunities available at Rollins as well as to the faculty and staff who have ceaselessly supported me throughout my academic journey.”

As a high school student, Cristina Toppin ’21 was the victim of an assault, and she was still embroiled in the criminal justice system during her first few months at Rollins. Faculty like art history professor MacKenzie Moon Ryan and sociology professor Amy McClure along with former director of external scholarship advisement Jayashree Shivamoggi drew out the confidence she needed to stand up for herself and the determination to prevent others from going through the same thing with no resources or advocates.

It was this consistent mentorship that helped Toppin become the first Tar ever to land a spot in Harvard Kennedy School’s prestigious Public Policy Leadership Conference, where she learned from social activists like former NAACP president Cornell Brooks. The double major in political science and religious studies went on to advocate for racial and gender equality on three continents, researching ways to make taxi rides safer for women in Namibia, developing briefs on social policies in Australia, and lending her voice to everything from the Latin American Student Association to Voices for Women right here on campus.

“My Rollins experience was shaped by diverse opportunities that coalesced around one theme: inclusive, equitable service,” says Toppin, who will start a master’s in public policy at Rutgers University in August. “Through the peers, faculty mentors, and friends I met around the world, I learned how systemic social issues intersect across time, space, cultures, and academic disciplines. I look forward to ensuring that the most marginalized people at these intersections are able to spearhead efforts for public policy change.”

Only at Rollins would an international business major write a comic book about her collegiate experience for her senior capstone project. As Neny Lairet ’21 reflected on her time at Rollins—through both humor and drama—she saw meaningful markers of success take shape.

Perhaps the most pivotal waypoint on her journey came in fall 2019 when Lairet’s mentor and former Rollins business professor Allen Kupetz connected her to an internship at Knoza Consulting, a local optimization startup founded by alumnus Adam Schwartz ’10 ’12MBA. Lairet got a crash course in e-commerce, drawing on critical-thinking, presentation, and communication skills she had learned at Rollins as she developed proficiencies in product listing optimization, compliance requirements, and data analysis.

Lairet went on to work full-time at Knoza as a client services manager, earning the full confidence of Schwartz, who referred to her as a “teammate who can think, communicate, and grow.” It’s a success story she credits to the future-proof foundation she formed at Rollins—from serving as president of the Business Student Leadership Council to volunteering at BASE Camp Children’s Cancer Foundation.

“As a first-year student, I knew I wanted to major in international business, but I wasn’t quite sure where that path would take me,” says Lairet, who started a new position as an e-commerce manager at Kramer America this past May. “At orientation, we were encouraged to get involved on campus and try out as many things as possible, which pushed me to join the Business Student Leadership Council, get an on-campus job, become a peer mentor, and serve as a social media ambassador for the College. My initial doubts were replaced by getting involved in my major, on campus, and in the larger local community.”