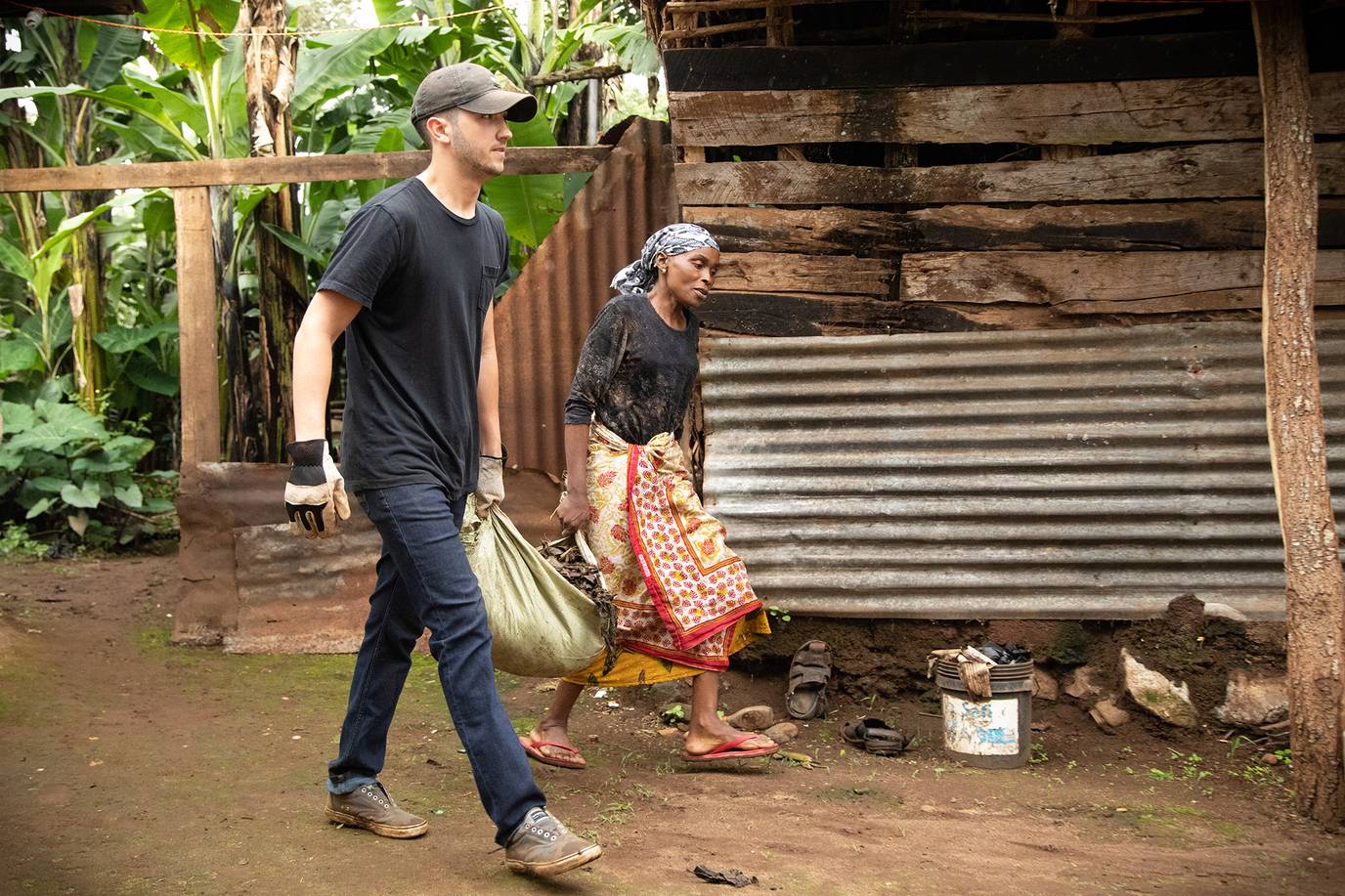 On this field study, students don’t have to move a mountain. But with the help of a Rollins graduate and an entire village, they’re helping transform one.

A sick feeling fell hard on Stella Khazzam ’21 in early June. It was the kind of feeling that makes the stomach swirl and the face sweat. The kind that comes upon you when you’re standing at the airport before a flight to another continent and you realize, I forgot my luggage. Or, in Stella’s case, my brother forgot my luggage. Did we mention she was feeling a little warm?

“Yeah, I was supposed to bring her main bag to the airport,” says Nico Khazzam ’18. “She was standing there in a pair of nice jeans, a new pair of sneakers, and a backpack. That’s all she had for the next two weeks. Fortunately, she’s pretty easygoing.”

She would need to be. A few months earlier, Nico had talked Stella into flying 17 hours to Africa with a group of 12 Rollins students as part of political science professor Dan Chong’s field study focused on community development. The trip had impacted Nico so much a year earlier that he decided to go again, even though he didn’t need the two credit hours (he’d just graduated). The students would be digging trenches, hauling bricks, and working on farms, learning what the term “social entrepreneurship” means. Not just learning it, though. Experiencing it, side by side with the people in the communities. First in Tanzania and then in Kenya.

For the next two weeks, Stella would live with just the contents of her little backpack. “She had no option but to let everything go,” says Nico.

The “letting go” started 6,000 feet above sea level, in a tiny village on Mount Kilimanjaro with a serendipitous connection to Rollins.

The ground in certain spots around the village of Mkyashi, Tanzania, is so hard that to move the dirt, it first has to be cracked with pick axes. So, it seems, do stereotypes about the work college students might do on a field study in a developing community like Mkyashi. Bricks for schoolhouses. Medicine for the sick. Leaving a place looking better than it did two weeks ago. It’s all done with good intention, but for Chong, community development involves more than getting your pants filthy.

“We take students who have a basic understanding of holistic development and let them see it up close,” he says. “That means whatever we help facilitate in a community, we want the people who live there to grow it and sustain it. What we offer is solidarity, empowerment, and ideas for business models. The truth is, they don’t need our skills.” 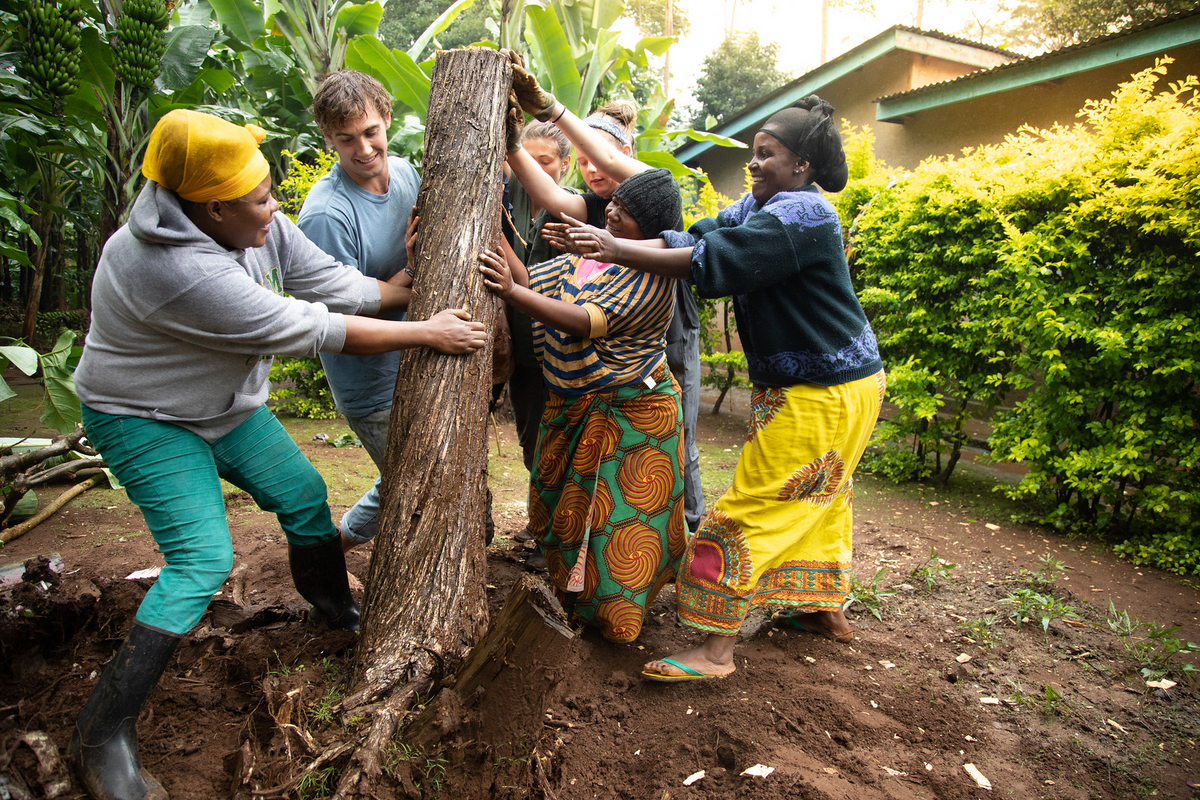 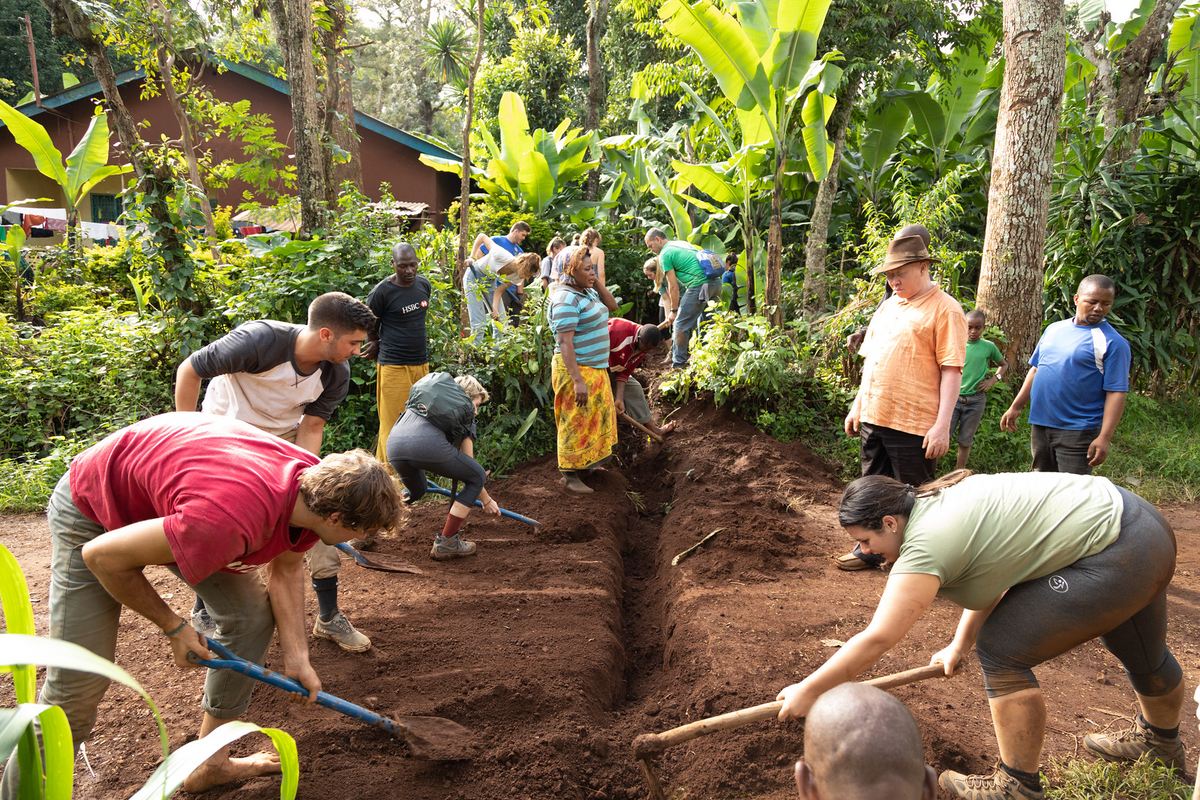 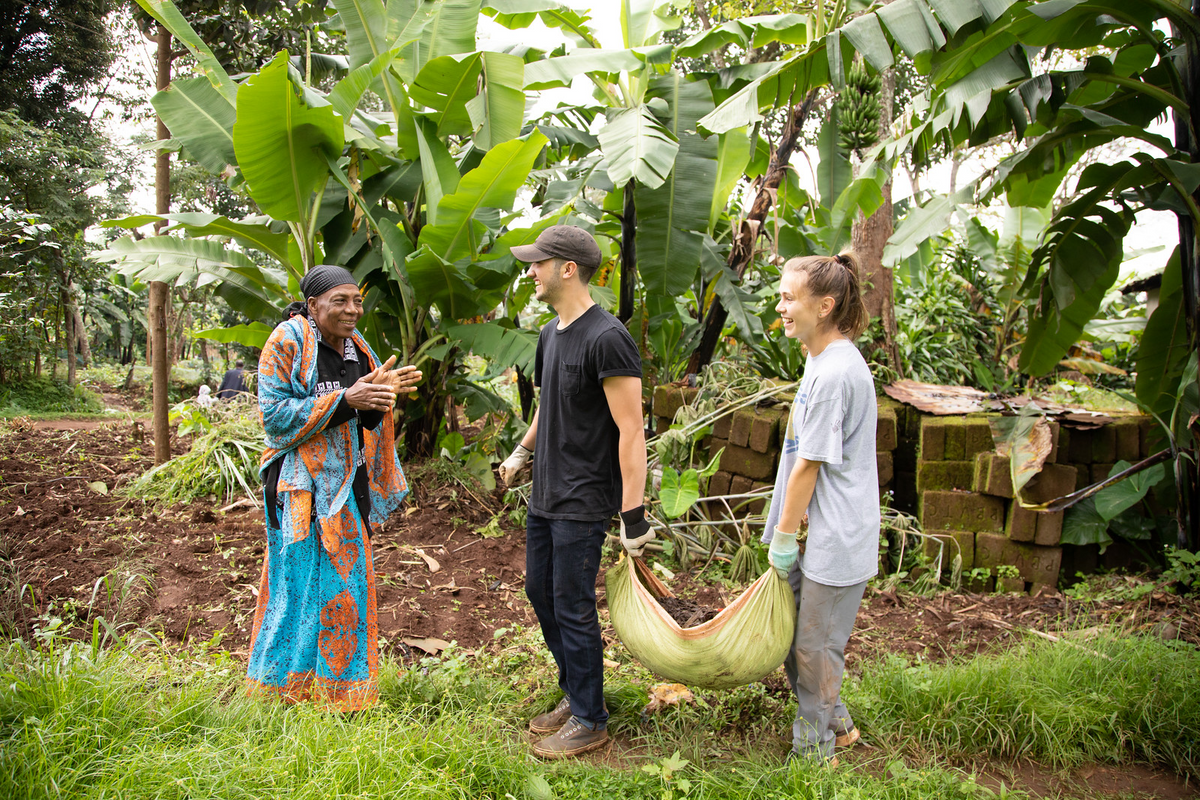 All of which describes Sam Barns ’11 ’12MBA. Barns confesses to having little to offer in the form of handyman skills. Yet it’s a physical structure he’s planned and started constructing in Mkyashi that has the community enthused and students arriving from 8,000 miles away. Barns’ groundbreaking idea? A 10-room ecolodge. That’s it.

A hand-built, no-frills lodge perched on the lush mountainside of Mkyashi. It isn’t even finished. But the genius of the lodge is that it weaves together Barns’ desire to improve lives long-term, his business acumen, a willingness to sweat, and even more willingness to collaborate.

“Sam is the reason this field study is unlike any other at Rollins,” says Chong. “The whole thing has come full circle.”

When Barns and his wife-to-be, Allison Crocker ’10 ’12MBA, first visited Tanzania in 2010, they came for the same reason most people do: fun. It most definitely was not for school.

“I thought we should go somewhere really cool before starting the MBA program and then an internship and then a job,” says Barns. “It might be our last chance for a long time.” 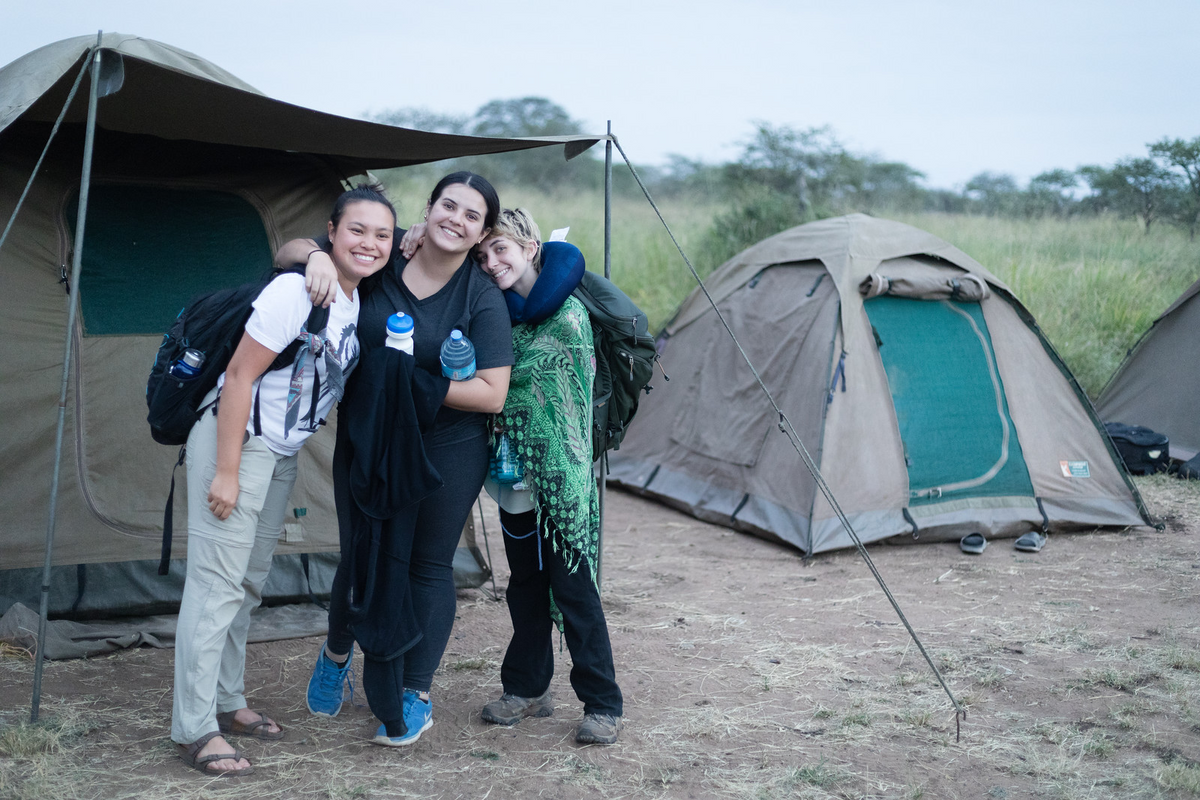 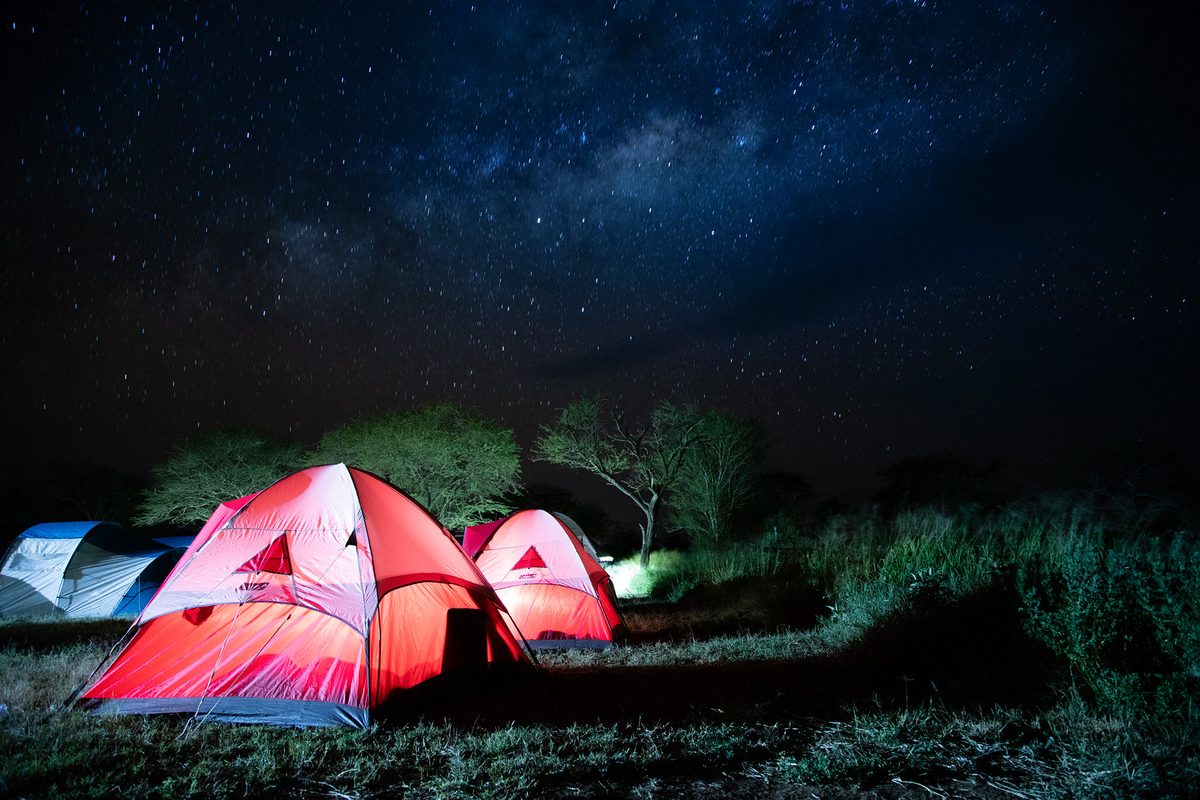 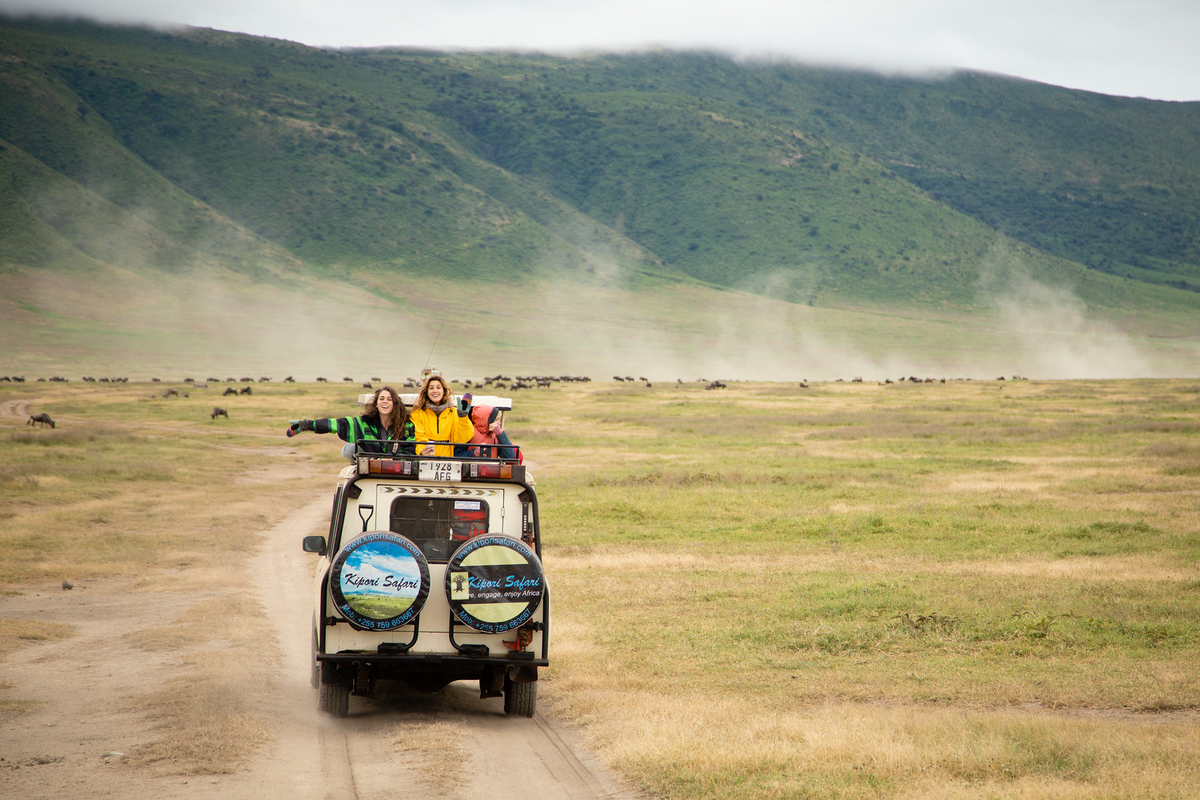 For 10 weeks they simply hung out with the people of Mkyashi, listening to their stories and drinking their banana beer. They had no agenda. Which could be why the experience left such an imprint on the couple.

“It made us want to stay involved,” says Barns.

He kept thinking about the Politics of Global Poverty and International Politics classes he’d taken with Chong, where Barns first heard someone openly talk about the positive and negative consequences of global assistance. Someone who had traveled to undeveloped communities around the world and could still talk optimistically about them.

“It isn’t unusual for someone to come back from a trip like Sam’s and be really passionate about something,” says Chong. “For him the passion didn’t fade. It just kept growing.”

Starting the MBA program at the Crummer Graduate School of Business upon his return from Tanzania proved timely. Every class filled another piece in the puzzle, which was ultimately completed by an entrepreneurship class. As part of the coursework, students had to write a business plan. This is when everything crystalized for Barns: He would help build an ecolodge in Mkyashi. The ecolodge would attract travelers respectful of the environment and culture, while also providing income for people of the village—not as employees but as owners.

“Putting it all on paper made the idea more real,” says Barns.

He gathered input from faculty and friends, but the real turning point came in a conversation with Chong, with whom Barns would talk after their intramural basketball games. “If you do this,” said Chong of the ecolodge, “I’ll bring students to the village for field studies.”

“That was huge,” says Barns, “because there was nothing vague in what he said. He wasn’t saying ‘Good luck with it.’ He was saying he wanted to be a part of it.”

The business plan called for $250,000 in fundraising. After 18 months, with only a fraction of the seed money raised, Barns decided to heck with it. He’d go back and live in Mkyashi for a year. He’d help plant organic gardens and break ground on a community-operated water system. He’d develop more relational capital and drink more banana beer. All along he’d be building something more permanent than even a lodge—he’d be building a bridge to a better future.

In 2014, after Barns returned to the U.S., he landed a position with Better Lives that mirrored what he’d been doing in Mkyashi. The Nashville-based nonprofit helps develop sustainable infrastructures in areas of need around the world. That same year, Chong made good on his promise. He led his first group of Rollins students to Mkyashi. Barns was there to make introductions.

“I can’t tell you how gratifying it was to go there and see the people in the community looking at this former Rollins student as one of their own,” says Chong. “With each trip to the village, I’d see the same passion that inspired Sam inspiring other students.”

Students like Nico Khazzam. He went barefoot during most of his two field studies, not as penance for forgetting his sister’s work shoes, but because he quickly figured out the long-term value of following the local people rather than directing them.

“My first time there I thought ‘doing good’ meant we had to go in and do something huge, change the world in a matter of days,” says Nico. “But then you see the slow process of the ecolodge, you see how patient Sam is, and you see the importance of relationships and asking questions like, ‘What do you need?’ and ‘How do you want to do it?’”

At the heart of it all, even in its stop-and-go construction phase, is the ecolodge. On the fertile ground is a blossoming outdoor kitchen, a bathroom, temporary tents where lodging will eventually be, an organic garden, and clean water. There’s also an infusion of energy every time Rollins students step onto the mountainside.

“When Dr. Chong brings his groups, you can sense a rise in enthusiasm in the village,” says Barns. “The students understand how social entrepreneurship works.”

And so the cycle gathers momentum. Nico is rethinking his career plans, saying he’d like to do something similar to what Sam is doing. “Or maybe I’ll be a professor like Dr. Chong, and take students on field studies so I can watch their eyes open as wide as mine have.”

With the exception of a little turn into Canada a few years ago, Ali Dukstein ’20 had never ventured outside the U.S. Then she too strode off the plane in Africa, eyes wide.

Three classes with Chong had convinced the political science major to go see for herself what it means to help develop a country.

Or in her words, “How do I know I’m passionate about something if I don’t experience it for myself?”

So Dukstein went. She learned to swing a machete and the intricacies of mixing compost. Surface lessons, you could say. And then she learned something deeper on the back end of the two-week field study. “I learned that listening is a key to sustainability.”

Her light-bulb moment happened not in the compost pile, but during a microfinance meeting in Dago, Kenya. In another global Rollins connection, the students had been staying for a few days on the family farm of Patrick Odoyo, staff director of the College’s Social Innovation & Entrepreneurship Hub. There in Odoyo’s hometown they met a lady who used a $50 loan to buy grass for her dairy cows and bottles for the milk, which she first filled and then sold in the community. She now has enough income to pay for electricity so her children can read at night. Another woman is using a small loan to start a hand-soap business.

“Poverty in developing countries isn’t always what we think it is,” says Dukstein. “The people are capable of building a business and operating it themselves. They just need a little help getting basic infrastructure off the ground.”

Can big ideas like “social entrepreneurship” and “global citizenship” and “community development” be as simple as that? Something you can accomplish without millions of dollars or plane loads of relief or so much as a change of clothes? For the record, Stella Khazzam says she learned a valuable lesson after two weeks without her luggage: “I’ve been overpacking.”

Her brother, Nico, thinks about the wisdom of her remark.

He also thinks about Barns’ ecolodge and the trench the students helped dig. It will supply water to a few families in a little village on a mountain in Africa.

“In the grand scheme,” he says, “it doesn’t seem like much. But when you’re there, you can feel it and see it—the world is becoming a better place for those people. And now they can make it as good as they want it to be.”

Step back and observe. Maybe making the world better can be as simple as this.