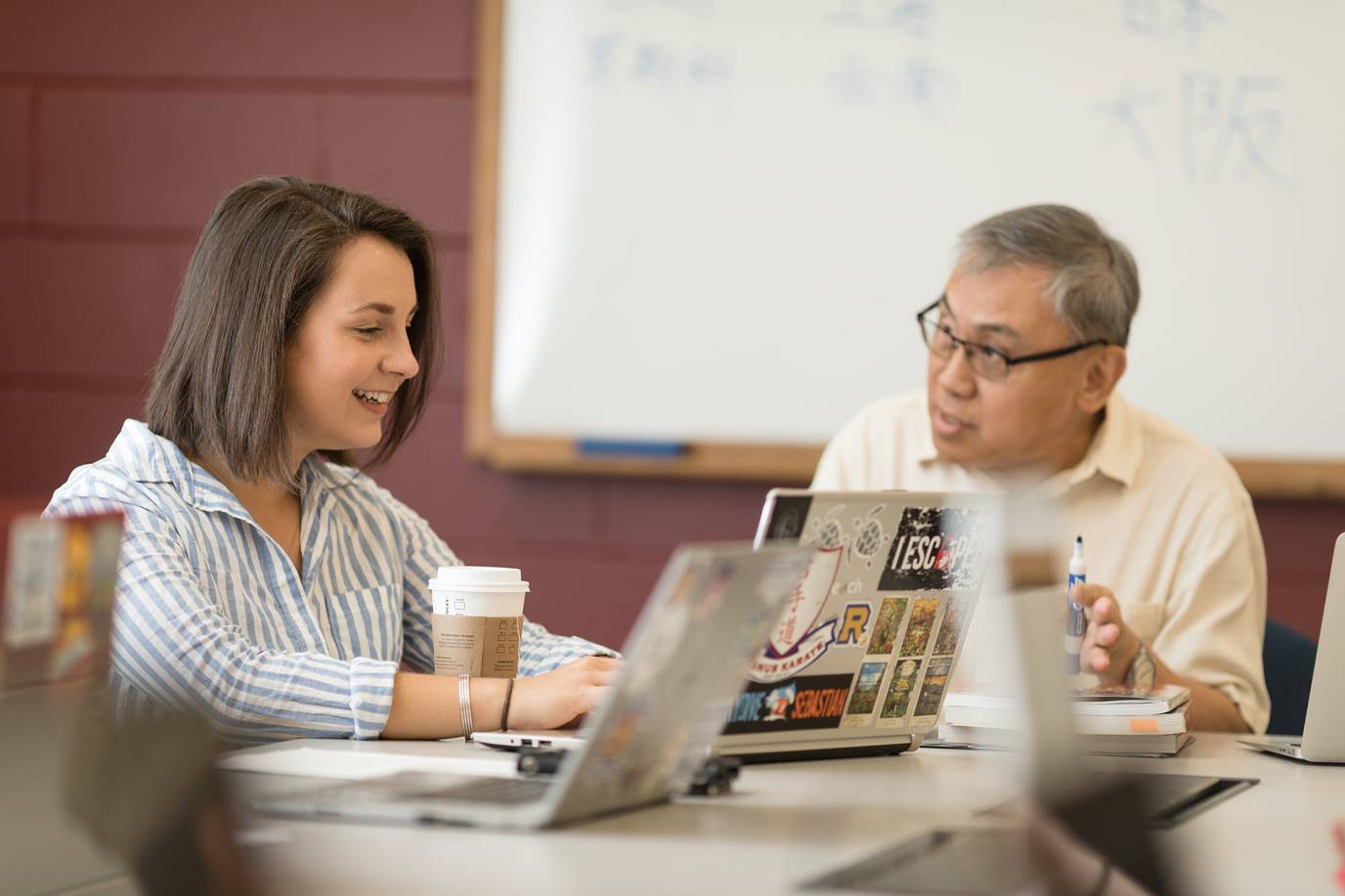 Karina Barbesino ’19—who has found the intersection between two seemingly disparate passions—says it all starts with language.

Karina Barbesino ’19 is conversationally fluent in three different languages. Besides being one of the most interesting skills on her resume, it’s also, perhaps, one of the most telling about her personality: She’s all about connecting with people.

“Language is the first way to start understanding people, and it teaches you humility,” says Barbesino, a double major in international relations and Asian studies with a minor in computer science. “At Rollins, my language courses were quickly enhanced by courses on East Asian history and Asian religions and a desire to study abroad in China, which was all propelled by my Chinese professor Li Wei. Getting extensive language experience both in the classroom and out in the real world during my time at Rollins has been invaluable.”

Throughout college, Barbesino achieved distinguished honors, earning the Boren Scholarship as a sophomore, a prestigious award reserved for students who intend to pursue careers in federal national security, a Critical Language Scholarship as a junior, and a Fulbright Scholarship as a senior. Thanks to these and other opportunities, she lived in three Chinese cities and completed four academic programs at Chinese universities during her time at Rollins.

After graduation, Barbesino interned for the Asia-Pacific Security Program at the Center for a New American Security in Washington, D.C., analyzing reports on Russian and Chinese disinformation campaigns and researching Chinese open-source information concerning the Belt and Road Initiative. She’s now working in a research position at Harvard’s Belfer Center for Science and International Affairs focusing on America’s policy with China.

When we first talked to Barbesino on a stroll across campus about her career at Rollins and her plans for the future, it was still that ability to connect that stood out more than anything. She stopped to say hello to a passer-by … in Chinese. “Sorry,” she said, “I was just saying ‘hi’ to one of my professors. I’m having dinner with her tonight.”

From multiple study abroad experiences to discovering the connections between her interests, explore some of the pivotal waypoints on Barbesino’s personalized pathway through Rollins.

At Rollins, Barbesino fused interests in languages, policy, and data and discovered a passion for how cyber security relates to human rights. “Throughout my journey at Rollins, I was fortunate to learn in various environments—from independent studies and round-table discussions to hands-on learning and seminars,” she says. “These learning environments forced me to tackle questions from different angles, both independently and in collaborative teams. I use the critical-thinking and language skills I gained at Rollins in my work every day.”

The chance to apply what she was learning in her small, discussion-based classes to real-world scenarios was among the most transformative of Barbesino’s experiences at Rollins. “My Chinese classes were bolstered by studying abroad in China for nine months,” she says. “Computer science courses were reinforced by teaching coding to local elementary school children, and political science classes were put into practice when I interned for a local congressional campaign. There’s no doubt in my mind that the real-world experiences I gained during my time at Rollins helped me stand out while applying for jobs and internships in the think-tank space.”

When Barbesino enrolled in Chinese professor Li Wei’s Elementary Mandarin Chinese course, she was testing the waters of what Rollins had to offer. Turns out it was the beginning of a lifelong relationship with both languages and Wei, who encouraged and supported her on every step of her journey. “I took a Chinese class with Professor Wei every semester,” she says, “several of which were independent studies, where I could focus on vocabulary and topics I wanted, and he helped me so much with my translations. It was my relationship with him that led me to an Asian studies major.”

For Barbesino, her Rollins Gateway is the combination of her unique experiences both in and outside the classroom that allowed her to pursue multiple interests and steer her own course with the guidance of important mentors. “At Rollins, I had unique opportunities that wouldn’t have been so easily accessible at larger colleges,” she says. “I had the freedom to expand my area of study, the ability to study abroad, and the opportunity to make meaningful relationships with faculty, staff, and peers. I’m so thankful that I was encouraged by my mentors to try new things, to explore many different interests, and to assert my academic independence. My professors truly equipped me with the right tools for life after Rollins.”

Start charting your course to personal and professional success at Rollins.