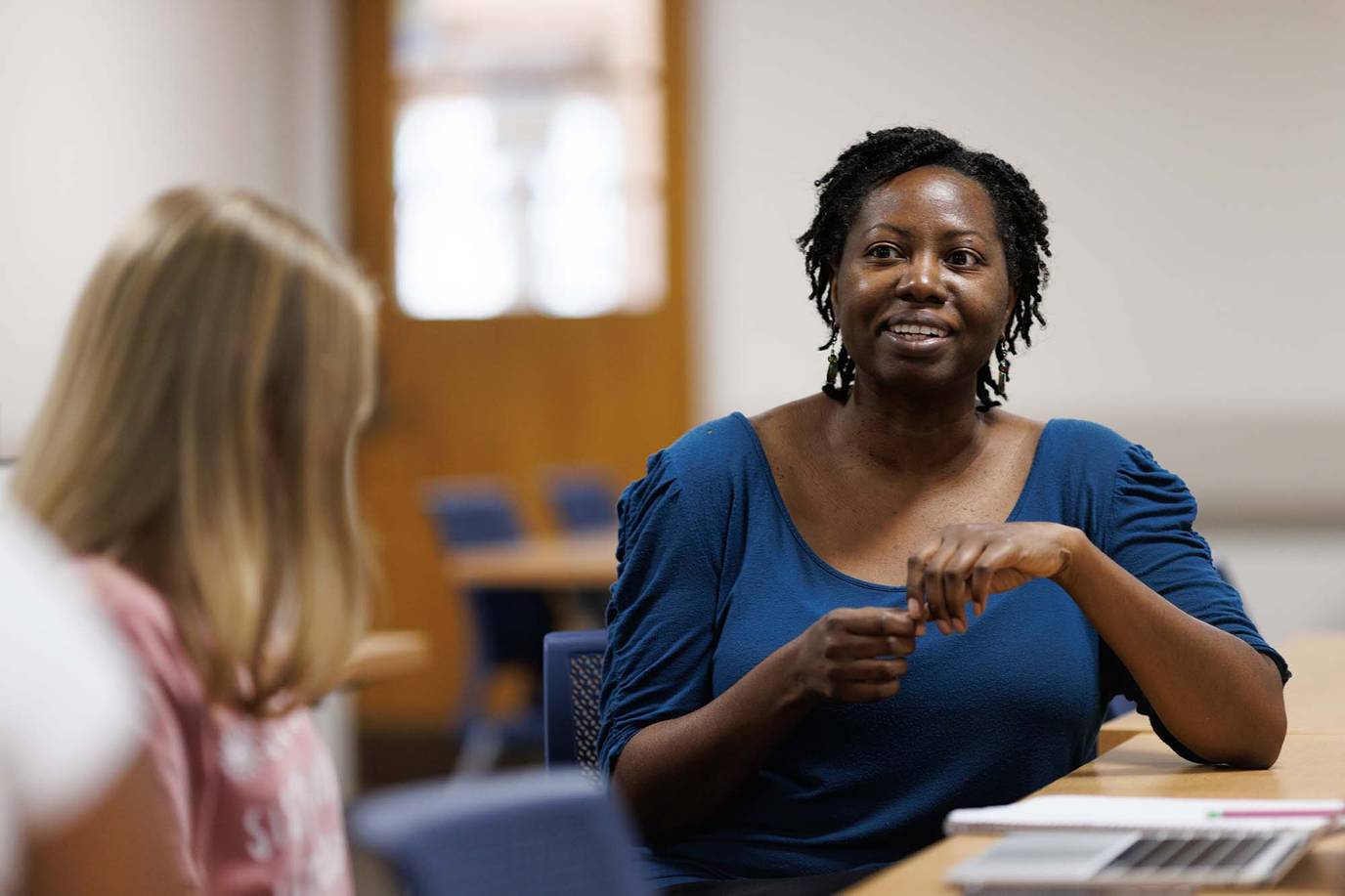 Whether it’s in the classroom or the community, anthropology professor Shan-Estelle Brown is committed to finding real solutions for issues of health inequality.

Anthropology professor Shan-Estelle Brown is used to identifying a critical moment by looking at the big picture. As a medical anthropologist, she studies global health in the context of culture, behavior, and history—say, the long-term impact of health-care disparities on Black women or how caregivers of sickle cell patients cope with their duties over time. As the coordinator of Rollins’ global health minor, she’s given countless students insight into how culture, politics, and the economy shape health-care systems worldwide. And she recently stepped up to embrace her own history-making moment as one of the first Black women at Rollins to receive tenure.

It’s all par for the course in a career that’s taken her on an interdisciplinary odyssey, from the humanities department as a student at Yale to the Rollins classroom as a professor, where she sets current events against the arc of history to tell the story of public health as we know it. Along the way, she’s tried to reframe existing narratives around people, taking a human-centric approach that benefits practitioners and patients alike. And she’s devoted to opening up her students’ eyes to the possibilities within their own work.

Zoe Pearson ’22—who conducted research on caregivers for people with chronic disease through the Student-Faculty Collaborative Scholarship Program with Brown—says that the sense of exploration that Brown brings to every project was a game changer in her own work.

“​​Dr. Brown encouraged me to explore a wide variety of disciplines during my time at Rollins, helping me get the most out of my liberal arts education and find my career path,” says Pearson. “She is a true academic and always has a new project or question brewing, and her ability to work across multiple disciplines to solve problems is really admirable.”

Brown and Pearson’s editorial on the treatment of essential workers during the COVID-19 pandemic was published in the Society for the Anthropology of Work’s journal Exertions and was crucial in Pearson getting accepted into a PhD program at the University of Buffalo.

“My work deals in human factors and social determinants that make a difference in people’s health outcomes,” says Brown. “But way back when, I wasn’t even aware that anthropology was a viable career path for what I wanted to do.”

As an undergraduate at Yale, Brown had dreams of becoming a physician. But she also loved writing, research, and combing through art, literature, and artifacts to see how societies evolved over time. So, in addition to taking on her pre-med requisites, she majored in humanities.

“I have always had multiple interests,” says Brown. “And I didn’t realize I could reconcile them until long after I graduated.”

After undergrad, Brown worked in various clinical and health-care administration roles before earning a master’s in English with an emphasis on professional writing at Old Dominion University. She went on to earn a PhD in anthropology from the University of Connecticut, where she wrote her dissertation on cultural perceptions of sickle cell disease in the French West Indies. That project would form the basis of a career and professorship focused on community health.

“I’m trying to raise awareness about issues of health related to poverty and how economic and political structures are creating health inequalities and poor health outcomes,” she says. “I want to ensure that the people who will ultimately become decision-makers in somebody else’s health care have a better understanding of how these human factors and social determinants affect people’s health.”

That sense of responsibility extends to the classroom and to her impact on her students.

“In my role as professor, I try to expose students to the variety of careers they can have in the field of health,” she says. “They’re not limited to being a doctor or a nurse. There are hundreds of paths to working in science and medicine.”

Brown opens up the world to her students through ongoing dialogue. This past spring, she taught a section of her Health Equity course to global health minors. One class session was devoted to health disparities among the people of the Marshall Islands just north of Australia. Later, Brown happened to be watching a PBS NewsHour segment about Marshallese immigrants living and working in Arkansas who were dying at an unprecedented rate due to COVID-19. Suddenly, the abstraction of a people struggling for health equity came into sharper focus, bolstered by the current news cycle.

“As soon as I saw that, I thought, I’m going to use this in class,” says Brown. “So much of my work is just going about my day, trying to figure out which current events to bring into class, but what’s interesting is that my students start to do the same thing. So every time I teach a class, it’s a little more current, a bit more of the moment, and different than the time I taught it before.”

The ripple effect of Brown’s teaching style has reached well beyond campus as her students have gone on to pursue health-related endeavors all over the world. Biology major and Fulbright Scholar Mirabella Kirk ’20 was inspired to tackle a real-world problem after taking Brown’s Drugs, Sex, and HIV course during which she received an assignment to construct a theoretical research plan for HIV anywhere in the world.

“I chose to do my project on a country called Lesotho in southern Africa,” says Kirk. “After I presented my research plan to the class, Dr. Brown said something that changed my life: ‘You know you could actually do this, right?’ It never really crossed my mind that I would be able to pursue a research study of this scale, but her faith in me revealed the possibilities. She connected me to one of her colleagues who had completed similar research in southern Africa, which is how I learned about the Fulbright.”

Using her class project as the basis for her Fulbright application, Kirk applied—and got accepted. She spentwas eventually able to spend eight months at Lesotho College of Education researching how adolescent girls understand and use PrEP medication to prevent HIV. She says she is grateful to Brown for helping her pinpoint her own passion. This fall, she’ll begin a one-year master’s program in medical science at the University of South Florida, with plans to apply to medical school in 2023.

“Dr. Brown was so personable and approachable,” says Kirk. “She facilitated engaging and interactive lectures where you’d never be afraid to ask questions, as she would always make a point to reiterate that there are no bad questions. As a mentor, she helped shed light on my passion for research.”

Wyatt Deihl ’21, Truman Scholar and incoming Yale public health graduate student, agrees. At Rollins, Deihl worked with Brown to self-design a major that merged public health and sociology. Like Kirk, he also took Drugs, Sex, and HIV, which set him on a personal journey to advocate for the reform of Florida’s outdated HIV criminalization laws.

“This class was my first time learning about HIV, and it was the first time that my identity as a gay man intersected with my interest in public health,” recalls Deihl, who founded the Rollins Public Health Association. “Dr. Brown taught the class from a social-determinants perspective, which allowed me to begin thinking about HIV as a risk factor for people living in Florida and to connect my own experiences to what we were learning in the classroom. Dr. Brown inspired me to become a fervent HIV activist both on and off campus.”

Under Brown’s guidance, Deihl completed two semesters of independent study analyzing issues of HIV criminalization and presented the pair’s findings at the AIDS 2020 Conference, the largest global HIV/AIDS research conference in the world. Their paper is currently under peer review, and they expect it to be published soon in the Collegiate Association for Inequality Research Journal.

In addition to her work in the classroom, Brown is an active researcher in the field of public health, a field that requires keen attention to emerging trends and rising issues. As public health conditions continue to shift and evolve, Brown looks for overlap in her own areas of expertise and tries to fill in research gaps where she can. In November, she and colleagues from around Central Florida won a national fellowship from the Robert Wood Johnson Foundation to study the experiences of Black women, HIV, and the use of pre-exposure prophylaxis (PrEP). And just recently, she was awarded a one-year grant focused on HIV prevention from the National Institute of Mental Health with Yale University and the Center for Interdisciplinary Research.

“I expect I’ll bring what I learn from that study into my Drugs, Sex, and HIV class, and probably a lot of my other classes too,” she says. “And so it will change again as we make progress toward identifying some of the problems facing Black women seeking care. And maybe one day, after we’ve solved this and other problems, the class will be purely historical.”

Until then, she’ll try to prepare the next generation of global health professionals to face whatever comes next, even if we don’t quite know what it will be.

“I want them to have the creativity and flexibility to steer the research and innovation in the right direction,” she says. “And that’s the best thing about the liberal arts at Rollins. It’s an opportunity to make new combinations of ideas out of new combinations of study. And in that way, I’m preparing my students for careers that may not even exist yet.”

Learn more about Rollins’ expert faculty and our unique mentorship model by scheduling a visit to campus today.