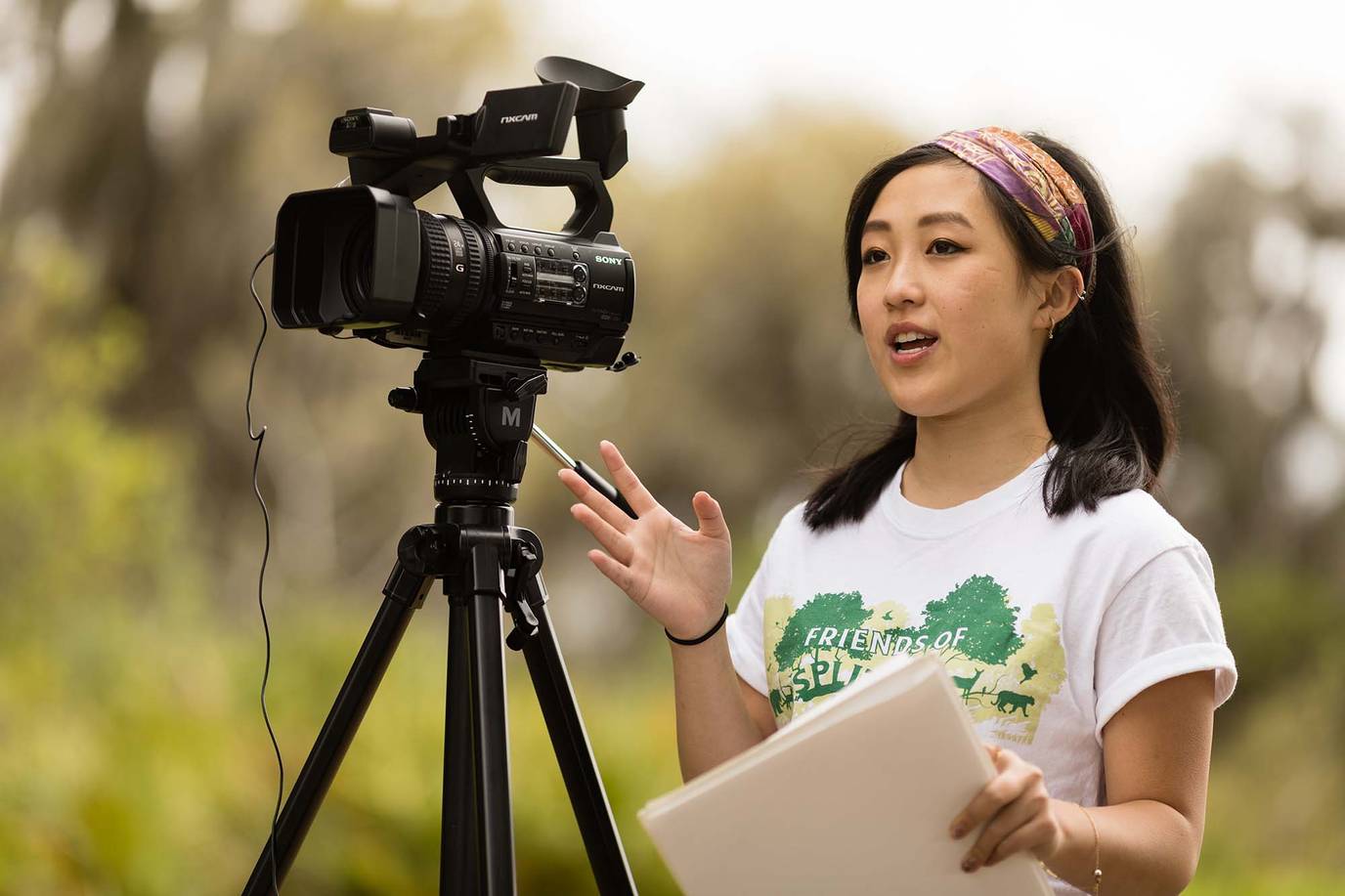 Renee Sang ’21 may be a local, but her Rollins experience took her well beyond the boundaries of Central Florida in her quest to illuminate social justice issues through documentary filmmaking.

Make no mistake about it: Renee Sang ’21 is charting her own path. And she’s filming everything along the way.

Sure, the Orlando native and independent documentarian followed in her older sister Stephanie Sang ’15’s footsteps when she made the decision to attend Rollins, but her experience over the past four years has been anything but ordinary.

“I had dreams of going somewhere a little farther than 20 minutes away,” recalls Sang. “But seeing my sister have such amazing opportunities at Rollins motivated me to apply. And my own Rollins experience took me farther than I could have ever imagined.”

How far? Sang studied in Morocco and London, where she held internships in journalism and documentary production, respectively. She also helped countless others study abroad as a global engagement coordinator in Rollins’ Office of International Programs. On the way to a double major in critical media and cultural studies and studio art, she made several documentaries, debuted an original film at an international film festival, and put together an original art exhibition at the Rollins Museum of Art all while finding ways to give back to her community.

As Sang reflects on her journey, she lands on a single defining principle to mark her personal and professional growth—social awareness.

“Freshman me and senior me are just so different in that there are many social issues I had no idea existed when I was just starting out,” says Sang. “I’m drawn to those issues, but I’m not necessarily an expert in the field. Documentary allows me to collaborate with experts to tell their stores, and that’s one of the reasons I’m so attracted to this kind of work.”

Her first year at Rollins, Sang joined the Bonner Leaders—a four-year, cohort-based community service scholarship program—and that single decision set her on a path that would form the basis of her work for the next four years. Early on, her cohort traveled just 40 minutes from campus to Apopka on an Immersion experience with the Hope Community Center and the Farmworker Association of Florida. There, Sang was able to meet with migrant farmworkers and hear firsthand about the many challenges facing the agricultural community.

“That Immersion was the most life-changing experience I had during my time at Rollins,” she says. “We talked about the intersections between immigration, farmworkers’ rights, and how we get our food. That was my first introduction to how these social issues can overlap. I didn’t know that farmworkers often face food insecurity. If I had to pinpoint a single moment in my Rollins education where it all came together, it was that Immersion.”

During her second semester, Sang enrolled in Memory and the Photograph, a Rollins Foundation in the Liberal Arts (RFLA) course exploring the ways in which photos can influence memory without the two being strictly synonymous. The class was simply supposed to fulfill a general education requirement, but it made such an impact on Sang that she decided to declare a double major in critical media and cultural studies and studio art.

Reflecting on her Immersion experience with new eyes, she returned to where it all started—to those fields in Apopka—and pointed the camera on the community organizers working to provide community-garden access to the farmworkers suffering from food insecurity. Building on a class project for critical media and cultural studies professor Steve Schoen’s course Making Documentary, Sang’s resulting film, Planting Seeds, Growing Justice, screened at the Global Peace Film Festival.

Sang continued fusing passions in art and activism when she developed her senior capstone art project, which landed her a spot in the coveted senior art exhibition at the Rollins Museum of Art. Sang’s work combined photos and text to highlight the natural beauty of Split Oak Forest Conservation Area, a parcel of land that was up for protection renewal during the 2020 election.

“Critical media and cultural studies is already a highly interdisciplinary major that incorporates media analysis, sociology, anthropology, political science, and more,” she says. “As I began to fine-tune my critical lens, I realized I could use art as a way to further my understanding of key social and community engagement issues. I was able to combine two majors into one creative focus: social justice. And anyone who knows me knows that’s the perfect fit for me.”

As someone with big dreams of traveling the world, Sang had the good fortune to land a work-study position in the Office of International Programs during her first year at Rollins.

“Getting to know the advisors in the Office of International Programs and seeing how supportive they were of every student who wanted to go abroad showed me how much they cared about making sure student needs are met,” says Sang.

In particular, she points to Director of Global Initiatives Giselda Beaudin, who facilitated her study abroad journey, which included a summer photojournalism internship in Rabat, Morocco, with Morocco World News and a semester abroad in London, where she worked at a U.K.-based production company. Sang was so passionate about study abroad that she was promoted to global engagement coordinator in her third year working for the Office of International Programs, where she has produced social media content and a feature-length video on the value of international learning opportunities.

The work never stops for Sang, who is currently producing on a documentary about the activists who came together to save Split Oak Forest before heading back across the pond to attend University College London, where she’ll pursue a master’s in ethnographic and documentary filmmaking.

“Documentary and art allow me not only to be a critical thinker, but they give me a platform to present pressing issues by working with others who have a firsthand account of the subject,” says Sang. “I’m grateful that Rollins allowed me to use my skills in this field to meet, converse, and develop relationships with people and engage in meaningful dialogue about issues important to them.”