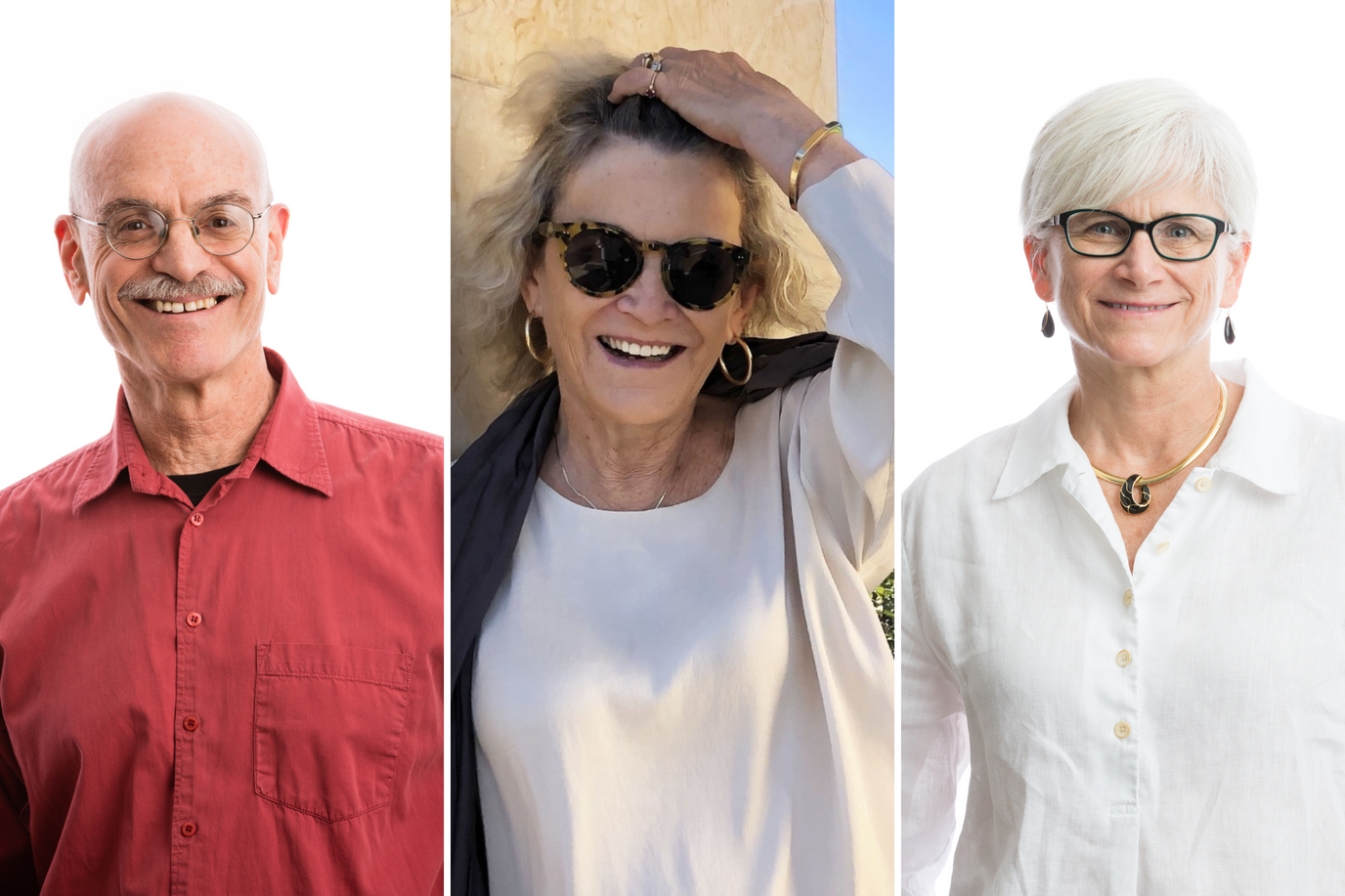 A trio of retiring professors in political science, mathematics, and English have provided a combined 73 years of service to Rollins.

An advocate for athletes. A mentor for math students. A poet who wintered with the writers. In May, Rollins bid a fond farewell to a trio of retiring professors: Joan Davison (political science), Jay Yellen (mathematics), and Carol Frost (English), each of whom leaves an indelible mark on Rollins and the students whose lives they helped shape.

We recently caught up with the three scholars as they close a long, meaningful chapter of their lives and start a new one, ready for more adventures.

As a political science professor, she offered courses in the international and comparative politics subfields, including U.S. foreign policy and international law, and her research interests focused on ethnoreligious identity and politics in Bosnia Herzegovina.

Davison considers her most notable accomplishment serving 30-plus years as the College’s NCAA faculty athletics representative (FAR). In this capacity, she acted as a liaison between athletics and academics to ensure academic integrity and student-athlete well-being.

In 2019-20, Davison became national president of the FAR Association, which represents all NCAA divisions, and in 2020 she won National FAR of the Year. That same year, she received the prestigious Faculty Mentor Award from the NCAA Division II Student-Athlete Advisory Committee.

“Our student-athletes bring energy and enthusiasm to campus,” says Davison. “Collegiate sports are considered ‘high-impact practices,’ and our coaches help our student-athletes develop skills and attitudes that translate into their academics. I love to watch them and to cheer for them.”

Upon coming to Rollins in 1986, Davison discovered an institution whose educational mission and approach aligned with hers.

“I was educated in the liberal arts tradition, flourished in small classes, and believed in the benefits of demographic and philosophical diversity,” she says. “Rollins’ relatively small size enables faculty members to foster community and pivot to other approaches if a pedagogy is not effective.”

Davison’s teaching style encouraged students to consider alternate views, understand the perspectives that formed those views, and try to bridge differences. At Rollins, she valued the freedom to select the topics she believed were most critical for students to explore. In turn, she fed off the energy that young people brought to her daily work.

“Education,” she says, “creates a basis from which societies can jointly approach problems and search for solutions, often in the form of compromises.”

What’s your favorite Rollins’ memory? “In 1988, the new Cornell Hall for the Social Sciences building became my home for the next 34 years. Professors Barry Levis and Laura Greyson undertook the interior design to emphasize student-faculty interaction and collaboration. The environment promoted learning and sociability.”

What will you miss most about Rollins? “Inquisitive and passionate students who approach liberal arts education with open and hungry hearts and minds. Such students are the lifeblood of the College and a motivating force for faculty. They are my legacy, and I will miss sharing their intellectual journeys.”

What are your top 3 favorite classes? “My favorite course was the capstone seminar in international relations, the point at which seniors formerly integrated their knowledge and completed research on a topic of their preference. Second and third would be International Law and U.S. Foreign Policy.”

What is your favorite spot on campus? “I have two favorite spots. First, in the stands at any Tars athletics competition. Second, nothing is more calming and reassuring than to look at the chapel belltower on a Sunday night with a full moon; the earthly world simply connects to the heavens, emphasizing both the timeliness and timelessness of education.”

How do you want Rollins to remember you? “If I am remembered for being present, sincere, honest, committed, and ethical, then I am content.”

Carol Frost taught at Rollins for 14 years, serving as the Theodore Bruce and Barbara Lawrence Alfond Professor of English and director of Winter with the Writers, the College’s former annual literary festival. As the latter, she brokered the affiliation between Rollins and the National Book Foundation (host of the National Book Awards), bringing some of the nation’s best writers to campus to work with students.

During her career as a professor and poet, Frost published 13 books of poetry, received two fellowships, earned grants from the National Endowment for the Arts, won four Pushcart prizes, and served as a chancellor for the Florida State Poets Association.

Victoria Brown, associate professor of English and an organizer of Winter with the Writers, told The Sandspur that Frost’s tenure “marked a golden period for contemporary literature on campus.”

Winter with the Writers, which traces its roots to the 1920s but was shuttered in the wake of COVID-19, offered top-flight literary experiences to the communities of Rollins, Winter Park, and Central Florida. Sponsored by the Department of English, the festival coupled world-class writers with the College’s creative environment, encouraging an appreciation of literary excellence in American culture.

“I think that my stewardship of Winter with the Writers gave my students a fuller view of the beauty of the imagination and of writing it all down,” says Frost. “They learned not to fear the idea of quality by reading some of the best writing of our age and meeting the authors. I loved the idea of directing Winter with the Writers, of creating an audience for good writing, and of the possibility of developing the festival into a haven for students curious about the life of the literary mind.”

Frost’s poems have been widely published in journals that include The American Poetry Review, Antaeus, Atlantic, Kenyon Review, The New York Times, the New Republic, and Shenandoah. Her book Honeycomb, which treats the subject of dementia through a sustained metaphor of the beehive, won the 2010 Gold Medal in Poetry from the Florida Book Awards.

“I hope that I have helped students learn the difference between recipes for success and learning to see what is involved and then to do it,” says Frost, reflecting on her time at Rollins. “To do it well. And to love that. I also hope that they better understand the value of good intellectual fun.”

What will you miss most about Rollins? “I will miss my students and the opportunity to teach each new course so that I might read more and learn more—that was the joy of teaching for me.”

What are your top 3 favorite classes? “My first poetry workshop with several talented young writers. Second would have to be Poetry Wars, in which students wrote a renga, the ancient collaborative poetry form. My third favorite class was Ecopoetry, which mixed poetry and ecology. But above all is Winter With the Writers. While it existed, there really was no undergraduate class I knew or know of anywhere that offered college-age writers the concentrated opportunity to work with the cream of American contemporary writers.”

Over his 23 years at Rollins, Jay Yellen taught a wide variety of courses, including operations research, probability and statistics, and graph theory. He has an affinity for applied mathematics, especially in the area of social entrepreneurship, and earned consistent praise from students about making math fun and relevant.

Yellen says one of his career highlights was collaborating with Anthony Wehrer ’12 on a research paper involving applied mathematics in 2010. When they co-presented at an international conference in Belfast, Ireland, Wehrer was the only undergraduate who formally addressed the audience.

Another big accomplishment was co-authoring the textbook Graph Theory and Its Applications alongside Jonathan Gross of Columbia University and Rollins colleague and fellow math professor Mark Anderson. All three authors will be completing a graduate-level textbook in graph theory in July.

Before coming to Rollins, Yellen was a professor for 12 years at Florida Institute of Technology in Melbourne, Florida, where he served as chair of operations research from 1995 to 1999.

“The idea of teaching at a small liberal arts college seemed like an ideal fit for me,” he says. “The small classes made it easier and more natural for me to approach my students on a one-to-one basis. In addition to increasing their knowledge, I feel like I helped my students succeed by increasing their expressive power and their ability to justify their answers.”

Yellen is an avid fan of Bach, the blues, and early jazz. A typical day might have seen him engaging in a math haiku contest with fellow professor Anderson or spending time with students in an art museum.

In an interview for the fall 2017 issue of Rollins magazine, Grace Soto ’17, a Bonner Leader and double major in math and computer science, spoke about Yellen being her favorite professor.

“Even though he’s super tough, he’s a super nice person who thinks very highly of his students,” she says. “He’ll be really annoyed if you miss class, but he’ll also sit down with you for hours to study and go over coursework. Plus, I love when he invites students to do ‘Art with Jay’ at the museums.”

Under Yellen’s tutelage, Soto became the first person in her family to graduate college. And the moment she crossed the stage, she had a job lined up with Lockheed Martin as a software engineer.

“Watching my students grow and seeing the impact I’ve had on them is something I’ll always cherish,” says Yellen. “The camaraderie among my colleagues and the opportunities to get to know my students as people made Rollins extra special.”

What’s your favorite Rollins memory? “Taking my first-semester students, once a week, to an elementary school where most of the children were underprivileged, and seeing my students’ confidence grow as they worked one-on-one on math skills with the kids.”

What will you miss most about Rollins? “The small classes and supportive learning environment.”

What are your top 3 favorite classes? “Strength and Beauty in Mathematics, a first-semester class turning students on to the power and excitement of what math can do; Intro to Discrete Mathematics for its problem-solving and deductive logic; and Abstract Algebra, a challenging senior-level course that often turns students on to pursue graduate study in math.”

What’s your favorite spot on campus? “Walking through the rose garden in front of the chapel on the way to my beloved Rollins Museum of Art.”

How do you want Rollins to remember you? “As someone who loves mathematics and the arts and wants his students to do the same.”