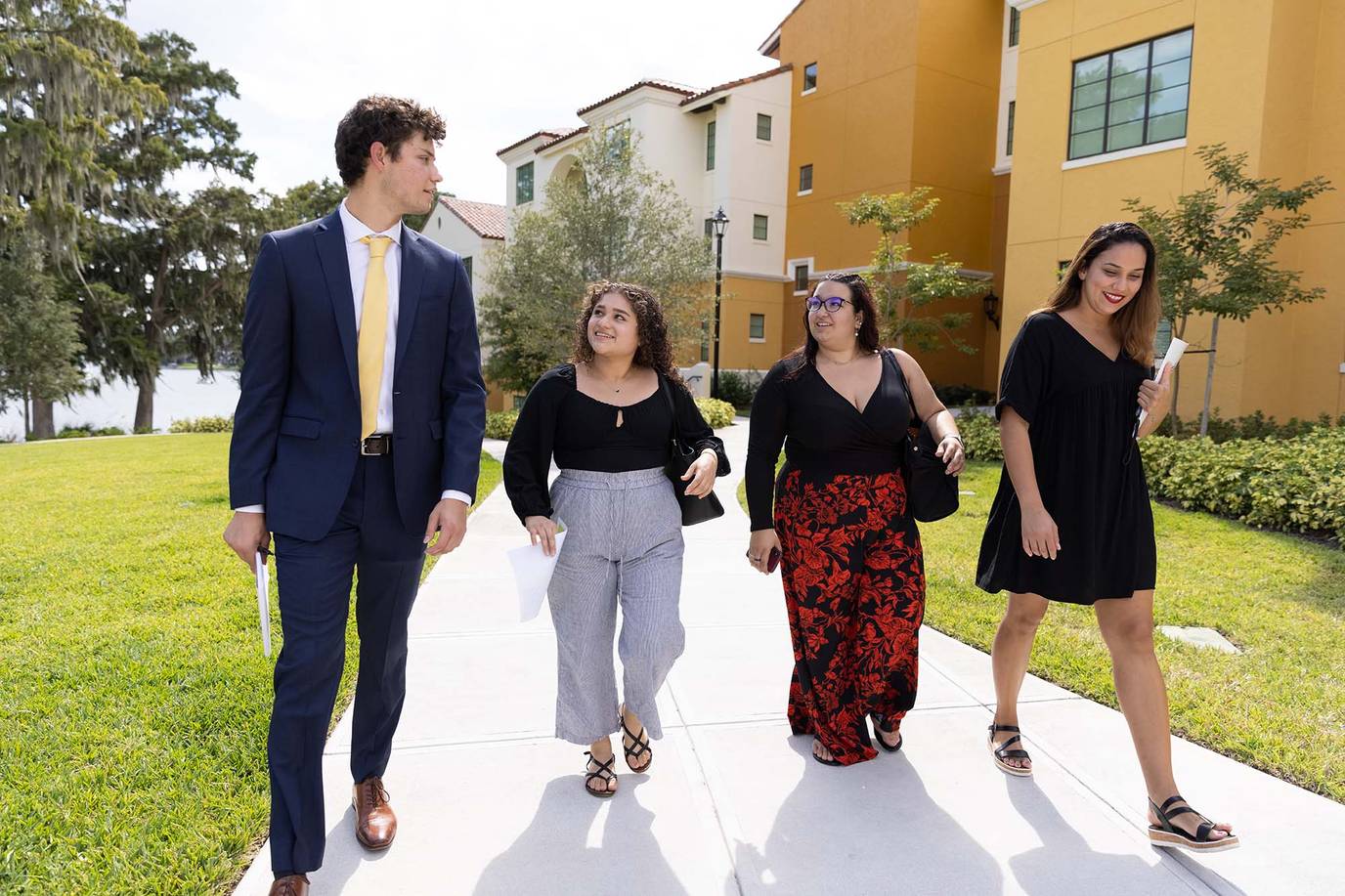 Take a look behind the scenes of the Latin American Student Association, which recently welcomed a new batch of student leaders.

Roommates Michelle Rodriguez ’24 and Vee Santa Lucia ’23 remember exactly where they were when they got the email.

“We were sitting in the Fox Lodge in Lakeside having breakfast,” says Rodriguez. “All of a sudden an email came through from Sam Vega, associate director of the Center for Inclusion & Campus Involvement, saying they were looking for students to join the student executive board of the Latin American Student Association.”

“I was ready,” says Santa Lucia. “I had seen participation in the club drop off through 2020 just due to the fact that many Latin American students were stuck at home because they couldn’t get back to campus during COVID. It’s hard to maintain a sense of community when you don’t see yourself reflected on campus. I looked at Michelle and said, ‘We have to apply.’”

Now, just a few months later, Rodriguez is co-president of the organization along with Christian Mahlstedt ’22. Santa Lucia serves as the event chair on the executive board, along with a handful of other students—each of whom is new to the role. In honor of Hispanic Heritage Month, we caught up with the new officers as they started putting together plans for an all-new iteration of the club.

The Latin American Student Association (LASA) has long been a mainstay among Rollins’ cultural community organizations, with a mission to foster community and opportunity among Hispanic students on campus while adhering to Rollins’ core values of community engagement and service-based learning opportunities. It was originally formed under the Center for Inclusion & Campus Involvement’s multicultural organization program and quickly became one of campus’ most active student organizations.

At its heart, LASA has always been a social organization, hosting events to provide Latinx students with a sense of belonging while also exposing non-Hispanic students to the vibrant and unique cultures that fall under the Latinx umbrella. In the past, members of LASA have partnered with other student organizations, such as the Black Student Union or the Latin American and Caribbean Studies Student Society, to participate in service projects like voter registration and food drives.

The board’s previous members all graduated this past spring, leaving a slew of leadership opportunities open to rising third- and fourth-year students.

On a sunny Friday afternoon, LASA’s new executive board is meeting to solidify plans for their first event of the year—Latin Fest—which will take place October 15 from 2 to 4 p.m. The plan is to host a celebration of Latinx culture that’s open to all students, whether they identify as Latinx or simply want to learn more about Hispanic culture. The event marks the first large, in-person gathering the club has hosted since early 2020 when COVID-19 shut down campus events. For many first- and second-year students, it will be their first exposure to LASA.

“I know I was craving that Latin American community when I came to Rollins,” says Santa Lucia. “I hope that this event provides an opportunity to discover some of the new people who have arrived in the last year or so.”

“Regardless of background, we want our events to foster a comfortable, welcoming, and safe space for all students, where they can be themselves and learn from others around them,” adds Rodriguez. “We hope to promote the Latin American community and increase representation through that welcoming environment.”

Festivities will include music, a dance competition, games, and, of course, amazing food—one of the many passion-filled pursuits that define Latin American culture and community. As the board members share suggestions based on their own favorite dishes and speculate on which empanada fillings will be most popular, staff advisor Sam Vega has the final word.

“I don’t care what we serve,” she says, “as long as there’s flan for dessert.”

As a Latin American & Caribbean studies major, Santa Lucia says she was inspired to get involved based on the things she was learning in class.

“All my classes revolve around Latin-focused politics and policy,” she says. “In general, I think Latinx people can often feel like outsiders in community spaces, so I wanted to step up and help create a space with other Latinos where we could embrace each other.”

Mahlstedt adds that he views LASA’s impact as something that goes beyond campus. The officers will be working to incorporate service opportunities into the organization during the coming weeks. The goal is to host at least two events per month—one on campus and one that gives back to the local community in some way.

“I was reading the other day that Orlando is 33 percent Latinx—that’s a third of the population,” he says. “Rollins’ close proximity to Orlando’s city center makes it even more important that we have a strong and representative cultural presence on campus. It means that we’re better equipped to serve the community at large.”

Recent grad Raul Tavarez-Ramirez ’21 credits his involvement in LASA with helping him develop improved interpersonal and communication skills, which he’s putting to use in his current work as a science and tech consultant.

“Assuming executive roles in LASA allowed me to develop my leadership style and management skills, which are useful wherever you go,” he says. “Plus, being involved with LASA allowed me to find a community of like-minded individuals who shared my love and pride for Latin American culture and heritage. As a proud Latino, being part of LASA gave me a platform to educate others on campus about our culture and history, and overall allowed me to share the warmth and joyfulness that Hispanics and Latinos are known for.”

More than half of Rollins’ international students hail from Latin American countries.