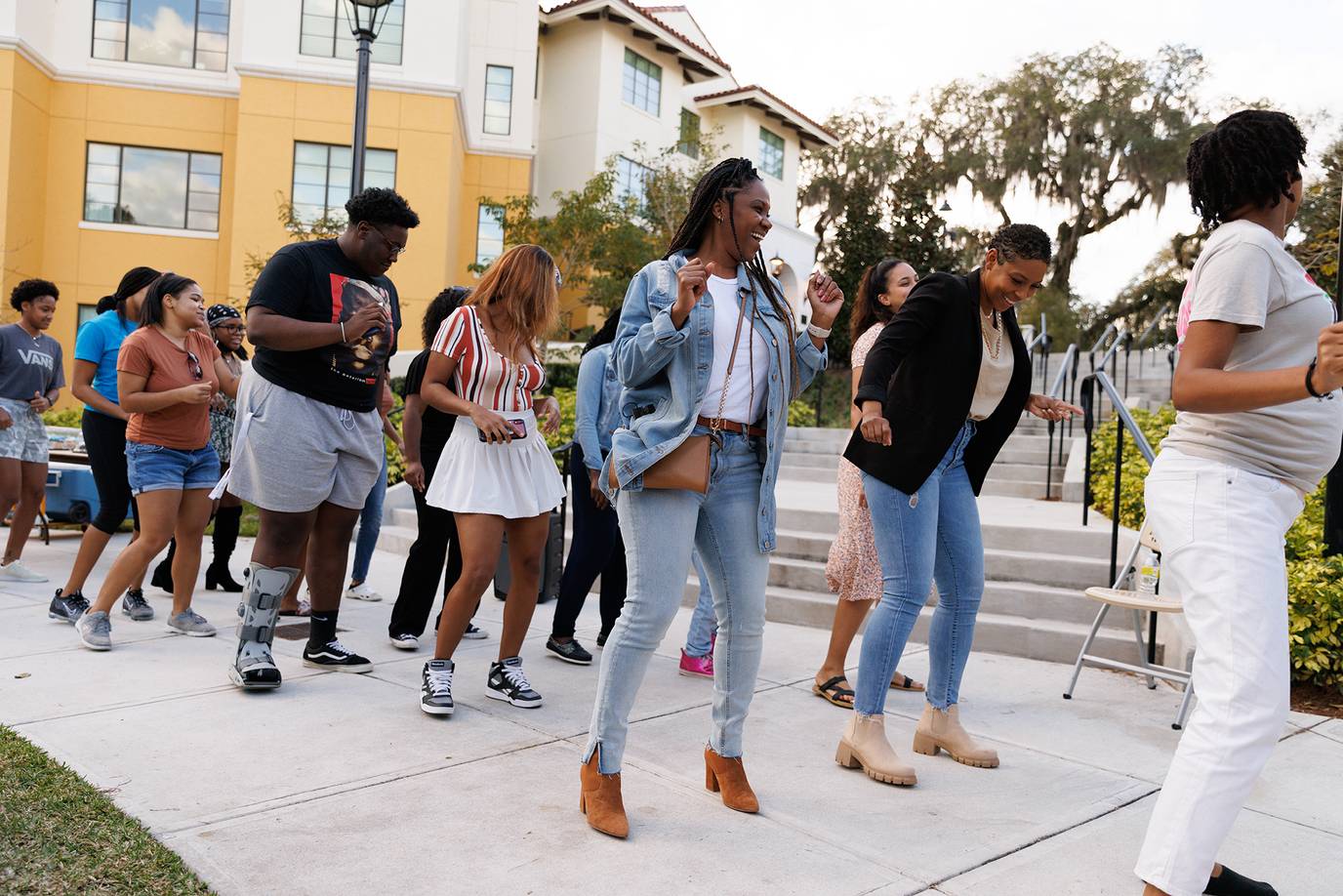 The history of Rollins’ Black Student Union echoes the history of America. Now, a new generation of leaders are making an impact on campus and beyond through service, education, and a chorus of voices calling for change.

It wasn’t the first time the College had admitted Black students—John Cox ’68, Della Dunn ’69, Bernard Myers ’70, and a handful of others enrolled between 1964 and 1966, during the height of the Civil Rights Movement—but it did mark a monumental change in race demographics within the student body.

Just one year later, those same 20 students wrote an open letter to the administration advocating for better conditions for students of color. The letter called for more courses pertaining to African American studies, increased efforts to recruit Black students, and financial aid targeted at minorities. It also crucially paved the way for economics major Krisita Jackson ’73 to found the Rollins Black Student Union (BSU) in 1970. 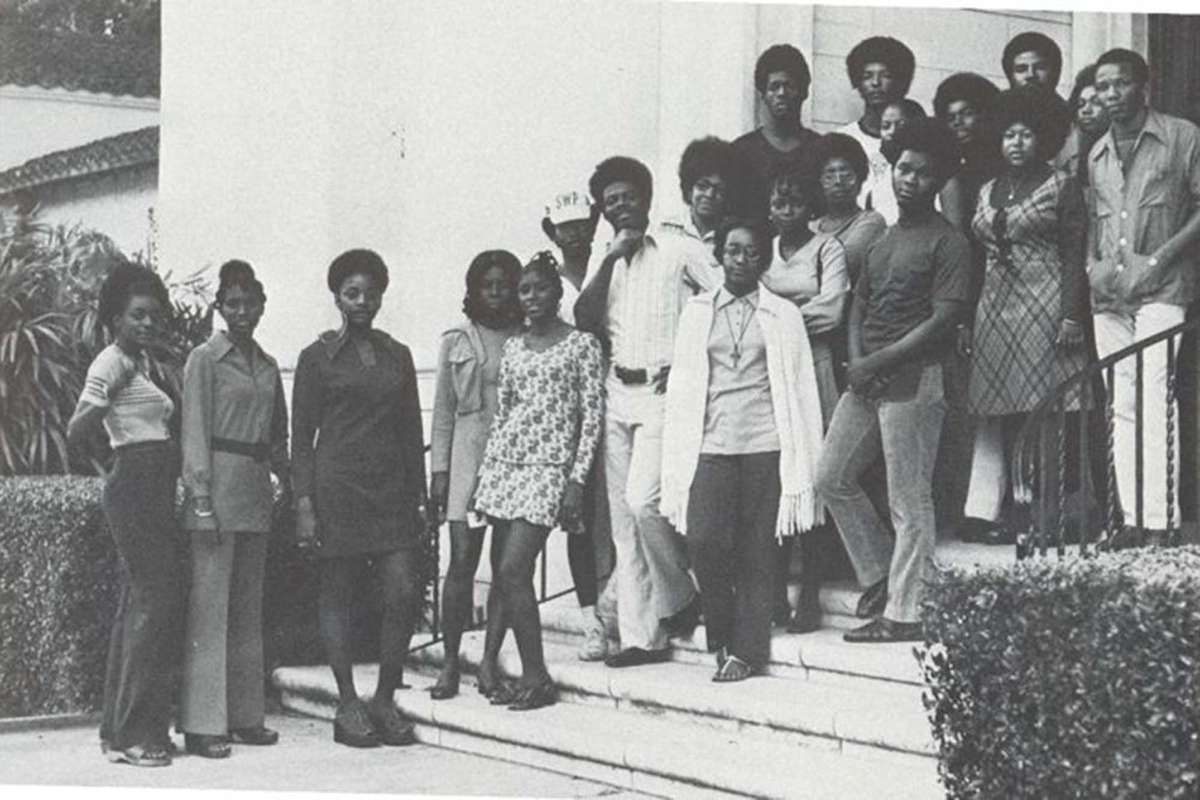 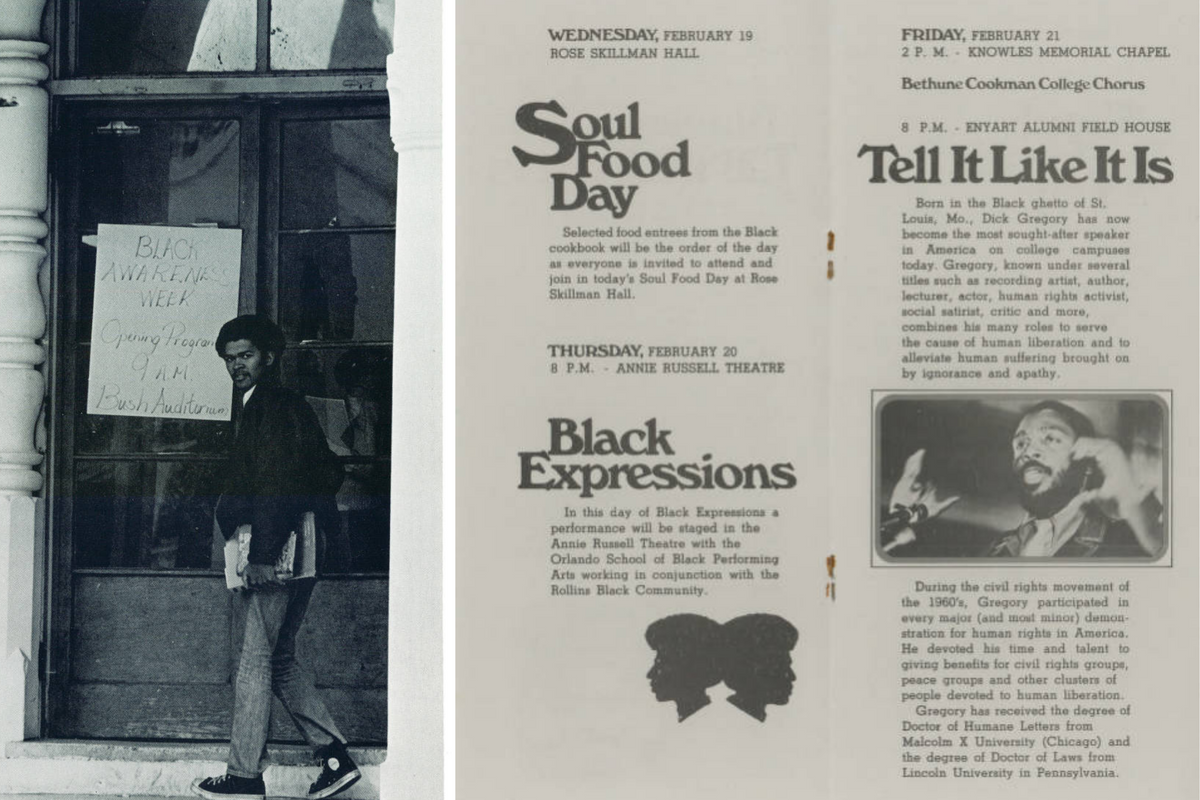 Three years after its founding, BSU hosted the very first Black Awareness Week celebration on campus. The event was a mix of showcases highlighting Black artists and presentations on Black culture and civil rights, culminating with a special appearance by guest speaker Rev. Jesse Jackson.

In the 52 years since its inception, BSU has remained an engine for change both on and off campus, embracing traditions old and new in the quest to provide a sense of community to students of color and their allies. In honor of Black History Month, we’re looking at what makes BSU such a vital part of the Rollins experience for so many students and how they’re moving the organization into the future.

“BSU is really a space for students who identify as Black to come together and talk about current events, social justice issues, and different things in the Rollins community that affect people of color,” says psychology major and BSU president Carley Matthews ’22. “We welcome everyone, even if you don’t identify as Black or African American, and a big focus is finding ways to connect with the Rollins community and the community at large.”

More often than not, those connections take the form of service projects. BSU is one of the most active service organizations on campus, with members performing hundreds of hours of community service every year addressing issues like food insecurity and equal education in our local communities and around the country.

“Our staff advisors are Robert Whetstone from the Center for Inclusion & Campus Involvement and Teasa Mays, the assistant director of diversity and inclusion in the admission office. Teasa is always encouraging us to link arms with each other—it’s an expression she uses often,” says Matthews. “How are you linking arms with your fellow students? How are you linking arms with and showing up for your community? And one way we do that is through service.”

Every January, students in BSU organize a weekend Immersion to Savannah, Georgia, to volunteer at Second Harvest Food Bank in honor of Martin Luther King Jr. Day. In addition to packing meals, they also take a deeper look into the history of the city, which was once a major slave port and served as a hub for the Civil Rights movement in the 1960s.

“The Savannah trip is special because it allows us to orient ourselves to history and make that connection between activism and service,” says Matthews, who also serves as an Immersion coordinator.

One of BSU’s most beloved annual traditions is Soul Food Sunday, a celebration of food and fellowship that takes place every February during Black History Month. This year, students gathered at Lakeside Neighborhood’s poolside terrace to connect, relax, and enjoy traditional dishes like mac and cheese and collard greens.

“Sunday dinner is an important part of Black culture,” says Ashley Williams ’18 ’22MPH, a community health specialist at Walmart with a focus on reducing health disparities. “You often see soul food served after church or simply as a way to bring families together. In a sense, Soul Food Sunday is a way for everyone in BSU to sit down at the dinner table together. It’s a place where we can feel safe to laugh and to celebrate togetherness, our history, and our culture.”

From humble beginnings as a potluck where everyone brought a dish that held special meaning to a full-on catered luncheon where club members are recognized for their individual contributions to the organization, Williams says it’s been exciting to see how the event has evolved.

As everyone settled in after the meal, the vibes turned even more communal. Someone took over the auxiliary line and put on the Cupid Shuffle, inspiring some pretty epic moves and lots of memories.

“Dancing especially is a way to feel joy together,” says BSU vice president and political science and philosophy double major Akheem Mitchell ’23. “It really feels like a family, which is especially important because so many of us are missing our families back home.”

Matthews first learned of BSU through the Rollins EMBARK program, which brings incoming students from historically marginalized populations together to explore campus resources and support systems. It’s a way for those who might feel nervous about starting college to acclimate and connect with others who might have similar concerns, whether it’s about enrolling at a predominantly white institution, navigating campus as a disabled person, or openly embracing one’s identity as a member of the LGBTQ+ population.

“During my EMBARK orientation, there was a panel of students representing different organizations like Greek Life, student government, and cultural organizations like BSU,” says Matthews, who now serves as the student coordinator for EMBARK in addition to her role as BSU president. “I remember hanging around and talking to the panel members after the presentation, and they encouraged me to join BSU.”

That one decision proved to be an essential waypoint on Matthews’ journey, helping her develop the leadership, public-speaking, and collaboration skills that are essential to advocacy work. She put these skills to the test as a communications intern for the OnePulse Foundation, an organization she will join full time after graduation providing educational outreach to Orlando’s LGBTQ+ youth.

“As a student with multiple intersecting minority identities, one thing I’ve learned is how to advocate for myself,” she says. “When I started college, I was shy and quiet. I never would’ve thought I’d hold some of the leadership roles I do now. But through relationships with amazing mentors, I was able to constructively channel my passions. Now, I’m always looking for ways to think critically about change in order to change the institution, change the structure, and change my perspective.”

When Williams was studying abroad in London in 2017, she found herself missing her BSU family. She reached out to the faculty coordinators, and Whetstone encouraged her to stay involved through email and social media, even going so far as to arrange video chats with Williams and the rest of the club (an impressive feat in a pre-COVID world).

“My fellow members encouraged me to make an impact from afar,” says Williams, who threw herself into classes about activism and service learning at Rollins and has now returned to the College to pursue a master’s of public health. Through the power of technology, she took BSU members through her day, showing off her London flat, answering questions about her study abroad experience, and sharing what she was learning during her time there. The major takeaway? If she could study abroad and take her activism international, anybody could.

“Sometimes it takes that kind of representation for someone to even consider a possibility,” says Williams. “It’s something I’ve carried with me in my role as a public health advocate. I don’t mind being visible if it helps spark a conversation among other people of color.”

The Rollins College Black Student Union stands on five pillars: advocacy, service, awareness, friendship, and inclusion. In order to promote these values, the club often hosts speaking events where professors, local leaders, and other activists can help educate the Rollins community about issues related to race and culture. These events are open to all students, regardless of BSU affiliation.