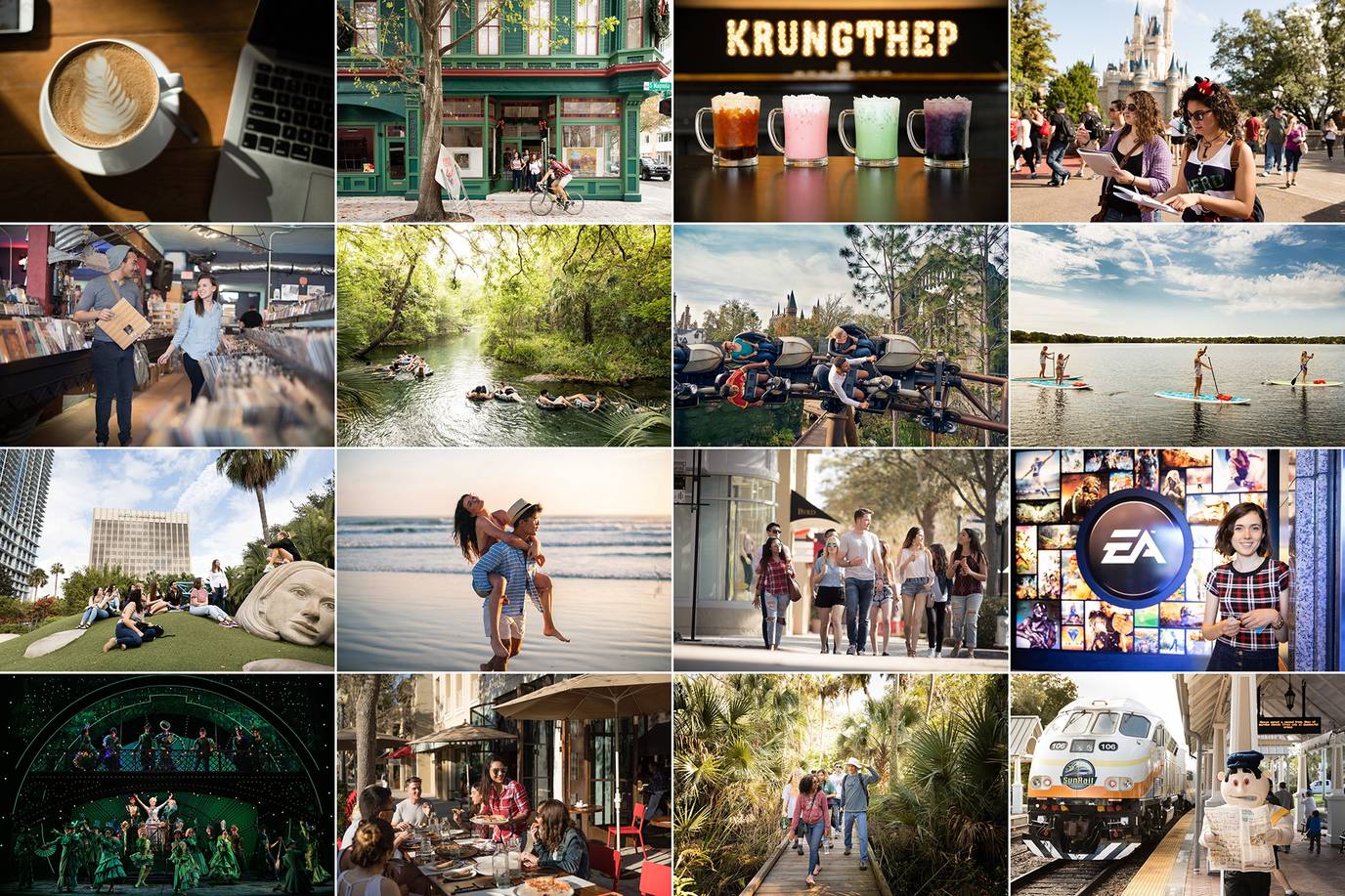 As Yelp’s Orlando Senior Community and Marketing Director and a Tar twice over, I’m constantly asked to divulge my favorite things about Winter Park and Orlando. I could write a novel on the subject, but let’s keep it short and sweet—my list of 50 things right in our backyard that will make you fall head over heels for Rollins’ hometown, just like I did.

Rollins is known for the intimacy and engagement of its discussion-based classes, but don’t expect to be tethered to a roundtable all the time. Marine biology students study at SeaWorld, English majors explore Zora Neale Hurston’s hometown of Eatonville, and art majors curate exhibitions at the Cornell Fine Arts Museum. At Rollins, all of Orlando is your classroom.

This charming promenade of world-class shopping and deluxe dining extends directly from campus. In fact, it’s tough to tell where Rollins ends and Park Avenue begins. Beyond the food (which warrants its own spot on this list), the avenue bustles with activity year-round, from outdoor movies in the spring to ice skating in the winter.

From Rollins’ 21 varsity athletics teams to a trio of professional sports franchises, Orlandoans always have something to cheer. Watch LeBron James and Steph Curry square off against the Orlando Magic at the world-class Amway Center. Support Orlando City and Orlando Pride at the city’s brand-new downtown soccer stadium. And catch the gridiron stars of today (Pro Bowl) and tomorrow (Buffalo Wild Wings Citrus Bowl and Russell Athletic Bowl) at Camping World Stadium.

Real talk for a second. Tars are foodies. And foodies love Winter Park. In fact, I’m fairly certain the hashtag #nomnomnom was coined here. Start at Prato, The Ravenous Pig, and Luma, then indulge your inner gourmand all over town.

Orlando was the No. 1 city in the U.S. for job growth from 2015 to 2018, and WalletHub recently named Rollins’ hometown the No. 2 best place in the nation to start a career. More than 150 international companies representing 20 countries do business in our fair city. Opportunities? Yeah, they abound.

Orlando ranks in the top 10 for internships per capita, and Rollins has an entire office dedicated to helping Tars secure the best career-builders. Your future classmates are currently running Orlando City Soccer Club's Instagram account, leading brainstorming sessions at the Florida Hospital Innovation Lab, and creating team-building experiences at a luxury chocolate factory.

A farmers’ market for every day of the week

My weekly shopping list includes seasonal produce at Saturday’s Winter Park Farmers’ Market, kettle corn and homemade dog treats from Sunday’s Orlando Farmers’ Market at Downtown Orlando’s Lake Eola, and fresh-caught seafood at Monday’s Audubon Park Community Market. Want to shop like a local? All you need is a bike with a basket, because all these markets are within 5 miles of Rollins’ campus.

Orlando’s diversity is fabulously evident in the Mills 50 neighborhood. Vietnamese family-owned businesses line the streets with indie music venues, thrift shops, and restaurants in between. Old meets new, hip meets Pho, and all is right with the world.

Proximity to the beach

No Floridian accepts being more than a hop, skip, and a jump from the beach. Nor should you. At Rollins, you’re an hour’s drive from Cocoa Beach and New Smyrna Beach on the east coast and a two-hour jaunt from Clearwater Beach and St. Pete Beach on the west coast.

Florida is called The Sunshine State for a reason. Heck, even our “winter,” which lasts precisely two weeks, is packed with vitamin D. So grab your sunnies, friend. You’ll need them with a whopping of 236 days of sunshine every year.

Orlando’s new commuter rail system happens to have a station just blocks from the Rollins campus, giving students quick and convenient access to transportation throughout Winter Park, Orlando, and beyond.

Rollins’ lakeside location gives Tars access to not one but six waterways. Launch a boat or paddle board at the boathouse and explore acres of water from Lake Virginia to Lake Minnehaha thanks to the series of lush canals that link the chain.

A frenzy of festivals

Keep your shorts, t-shirts, and sandals handy, because Orlando is home to dozens of festivals all year long. Walk among the undead at Zombietoberfest, toast Mother Nature at Central Florida Veg Fest, and watch aerialists and ballerinas take over downtown at Creative City Project. Then dance your heart out at Electric Daisy Carnival and Florida Music Festival, and catch up on culture at the Winter Park Sidewalk Art Festival and Fashion on the Avenue.

A vibrant and varied art scene

The new Dr. Phillips Center for the Performing Arts, which was named one of the World’s Coolest Tourist Attractions of 2015 by Travel + Leisure, hosts everything from Wicked and Chris Rock to performances by Orlando Ballet and Opera Orlando. If your tastes veer toward the avant-garde, check out The Orlando Fringe, the longest-running fringe festival in the U.S.

Downtown Orlando is packed with offices and apartments, but it truly comes alive on weekends and nights. Grab a bite at Artisan’s Table before catching a flick at Plaza Cinema Café 12. Then end the night dancing at Independent Bar for New Wave ’80s Night or College Indie Night.

Tacos, tacos, and did I mention tacos?

What’s better than three restaurants serving the city’s best tacos within walking distance of one another? Nothing. Absolutely nothing. Partake in this ménage-a-taco at Tako Cheena, Black Rooster, and Pig Floyd’s Urban Barbakoa, which is owned by Rollins alum Thomas Ward ’05.

Tech is taking off

From a history professor geeking out about monsters in American culture at Nerd Nite to the head of the Central Florida Zoo presenting hilarious animal-mating habits for Pecha Kucha, Orlando boasts a speaker series for every taste.

This indie record shop’s reputation helps it score intimate in-store performances from some of the biggest names in music. So, hop on your bike and head over to sift through some musical treasures. Bonus: It’s owned by Rollins alum Sandy Bitman ’93.

See what I did there? Tars love to get their lit on in The City Beautiful, and there’s no shortage of bookish events to satisfy one’s inner bibliophile—from Functionally Literate and There will be Words to Rollins’ own Winter With the Writers.

Orlandoans are super proud of their local street-art scene. We have murals splashed across tall buildings by some of the dopest graffiti artists around (check out Boy Kong). We straight up refuse to be boring in this city.

Orlando is recognized within the street dancing community as one of the top Bboy (breakdancing) cities in the world. In fact, Victor Montalvo, the No. 1 breakdancer in the world right now, is a local.

Getting its name from the adjacent T.G. Lee Dairy plant, this funky neighborhood is rough around the edges in a way that screams authenticity. It’s known for its grungy/fab local restaurants and hosting Tasty Tuesdays, a weekly food truck party.

Your parents will love Rollins’ boutique inn for everything from its chic style and contemporary art collection to its close proximity to campus and the Southern-inspired fare served at Hamilton’s Kitchen. You’ll love it because all profits from the College’s award-winning hotel support student scholarships.

With SPARC Day, Immersion, and courses centered around community engagement, Rollins helps you make an impact in Orlando from your very first day on campus. The city shares the same spirit. From dreaming up crowd-sourced action projects at The Hive to micro-granting community dinners at Orlando SOUP, Orlando has the framework for taking a community-minded project from fledgling idea through successful implementation.

This 1,400-mile network of trails stretches from the edge of the Everglades to panhandle and its packed full of outdoor adventure. Where else can you walk along a natural spring that has shark teeth hidden in the sand and a gator sunbathing nearby?

Orlando offers plenty of opportunities to embrace Florida’s wild side. Where’s a student to start? Fly across the swamp on an airboat ride, chow down on fried gator bites, and take a dip with manatees at Blue Springs.

Ranked one of the top 5 U.S. cities to start a business (WalletHub), Orlando is small enough that you can be the first to start something but big enough to support it.

What started as my attempt at creating an irreverent city hashtag now has more than 90,000 uses on Instagram. Check it out some time for a crowd-sourced collection of things that make Orlando great.

Orlandoans love WPRK, Rollins’ eclectic student-run radio station. Have a hankering for obscure Nordic ambient music? Got an idea for a talk-radio show? Head to the Mills Memorial Hall basement where students host and the community listens.

No matter where you find yourself in Winter Park or Orlando, you’re never far from a lush oasis. Silence your phone and discover the peaceful calm of Kraft Azalea Garden, the rich diversity of Mead Botanical Garden, and the canopied walking trail that hugs the shore of Lake Virginia on campus.

Social entrepreneurship is thriving at Rollins and throughout Orlando. For proof, look no further than Downtown Credo. The mission of this name-your-price coffee spot is to “reject our tendency toward apathy and impact our city” by working with local youth and funding local social enterprises.

Vegans, rejoice! Some of Orlando’s top-rated restaurants serve strictly animal-friendly fare. Grab breakfast at The Sanctum Cafe, lunch at Ethos Vegan Kitchen (a block from campus), and dessert at Market on South.

Everyone from Huffington Post to NPR has lauded this local group. The social start-up partners with local residents to transform their lawns into vegetable gardens, then delivers the produce to local restaurants and farmers’ markets using pedal power. Past and present Tars have been integral in getting the venture rolling. In fact, Caroline Chomanics ’19 is program manager of the Orlando branch and Alec Staley ’20 is the group’s greenhouse manager.

Greenwood Cemetery is full of bizarre, unexpected history lessons, and its Moonlight Walking Tour, led by the cemetery sexton, fills up in minutes each month. Cross your fingers you’ll make it in (and out).

James Beard Award nominees and foodpreneurs have ushered in a local food renaissance. Articles in national publications like The New York Times and Forbes exemplify how the nation is taking notice of Orlando’s artisanal food scene.

This treasured performance arts space features theatrical burlesque and cabaret-style shows with themes ranging from sci-fi and disco to culturally relevant shows that helped a community cope with grief through dance.

When the man walking through Downtown Orlando in hot pants and furry boots doesn’t shock you, you know that EDC is in town and 60,000-plus people are getting ready to dance their hearts out to the world’s best electronic music.

With ballerinas doing pirouettes down the sidewalk and acrobats hanging above the street, you’ll feel like you’ve wandered onto a Baz Luhrmann movie set during this giant one-night creative festival.

On the last Friday of every month, hundreds of cyclists hit the Orlando pavement with a message. Sometimes it’s a tribute ride. Sometimes it’s just to promote education about sharing the road. One thing’s for sure, though, it’s always community-driven.

You didn’t think I’d leave out the old mouse, did you? Whether you’re in it for the princes and princesses or for the wizards and wands, no place is on par with Orlando when it comes to pure fantasy.